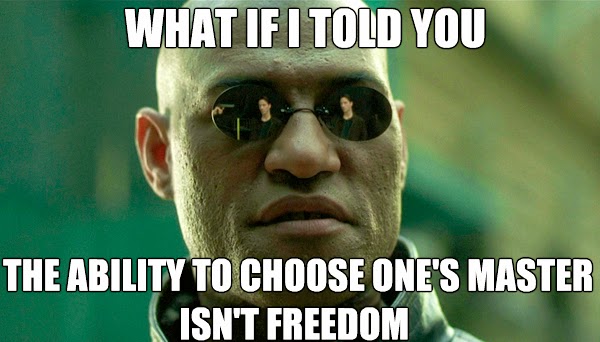 “Democracy is a pathetic belief in the collective wisdom of individual ignorance.”
– H.L. Mencken

Voting is a primary tool for tyrants, they need the blame shifted from themselves to the willing accomplices in the population for the crimes they’ve committed and those uncommitted up to the time they resume their nefarious tasks of threatening, fining, kidnapping, maiming and killing selected Helots who happen to slide into the sight the government machine has focused on its latest rapine project.

I’ve explained in essays before the nuts and bolts of why voting is a declaration of war on your neighbors, friends and family. If a local gang flying colored rags and singing bad songs came to you and said we’re taking half of your shit and we’ll put a surcharge on your misbehavior if you object, some of the men may go to gun but most Americans would simply roll over, expose their bellies and trickle a small amount of urine on themselves to demonstrate agreement to the idea.

Voting is a failure of moral imagination.

You’ll notice a vote in this country is never about changing the system to one of zero theft and initiated aggression on the part of the state. It’s always about a nest of psychopaths offering a menu of the same violent and economically illiterate voodoo that is government bookkeeping and barbaric behavior on residents and non-residents alike. Clinton is a classic candidate in America in that she is a sanctioned crime family member whose obeisance to the law is more nuanced than the average human and she has a penchant to wage war against anyone opposed to her through both ideas and actual violence.

The Clintons and Busheviks have similar crime family DNA. The Republicans have yet to win the Offal Office without a Bush or Nixon on the ticket since 1952.

2016 has been an especially bad year for the Wizard of Oz in America because the curtain has been pulled back to expose a rotting maximum government dynasty that seems to seamlessly trace its roots back to the Lincolnian Marxist overdrive applied to the Hamiltonian machine. The email revelations on the DNC not only reveal a sclerotic and arthritic grasp on the levers of criminal power but a stupidity that defies imagination when one considers the non-existent security measures taken to protect their internet communications. The alphabet soup of palace intrigue and kindergarten whisper campaigns animated everything from a demonization of the Catholic church to the secret jeremiad against the now compliant Venezuelan Bernie.

Imagine if you will: none of this had come out before the election season, the mass of bleating sheep would be a little more numerous and a small remnant of cognoscenti would have the burden of knowing who the Clintons were without having a leg to stand on in proof. I will tell you that if the same releases had occurred on the RNC, the Democrat’s trustworthy clients among the Republicans would have demonstrated the same intrigue levied against the enemies of Jeb Bush, who is the perfect GOP candidate: a milquetoast government supremacist of middling intellect willing to be the water boy for every expansion of Leviathan that would come across his desk. The Busheviks have always been reliable supporters of every government demolition of individual liberty and pliant apparatchiks for fleecing the tax Helots in every way imaginable.

I’m not an acolyte of the Constitutional framework and the resulting monster unleashed against the victims in North America and the entire planet after 1893 after the aboriginal population had been murdered and reduced to manageable proportions on the continent. You are witnessing the apex accomplishment of the Hamiltonian Constitutional construct.

I’ve discussed the many wonderful qualities of secession in previous posts to include in the last fortnight. The usual suspects even among the vaunted threeper crowd that secession is legal in Texas and nowhere else always amuse me. I’ve given up on Constitutionalists of every stripe who have become nothing more than Menshevik apologists for a ballooning government. Let me set the record straight: with rare historical exceptions (the Czech-Slovak divorce), secession is never within the legal framework of ANY state.

If you think the BREXIT decision is safe, wait for it. The future portends some interesting wrinkles.

If Texas wants to leave, don’t vote it away. Walk away and cut off all ties. Take a week to secure the borders and establish diplomatic relations with countries abroad first and the American government last.

Yet history is replete with thousands of examples of countries that simply wrested their liberty by force of arms or wholesale refusal to comply with every facet of threats and promises by the losing government. I would daresay that ninety percent of all nation-states in history are born in secession. It wasn’t the US that came to the table in Paris in 1783 to fashion the peace after eight years of war, it was thirteen different nation-states that were formerly fleeced colonies of the Crown in London.

Secession is the natural orchid house for the evolution of new polities and breakaway entities.

Look, nation-states are criminal enterprises dressed up to resemble legitimate storefronts with colored rags blowing in the breeze, bad music crackling on the loudspeaker and splendidly dressed psychopaths singing the odious song of their conquests, promises and future greatness. You’ll note the greatness is usually cloaked in a sacrifice that the violence brokers themselves never dirty themselves with. Your attendance in government schools was nothing more than a finishing process to make sure you as slave people think you’re free.

So what to do with the vote?

I have a suggestion. Never concede a vote.

I know, I know, the fashionable sociopaths coo their soothing words about the peaceful transition of power but what they leave out is there is nothing peaceful about the process. Don’t think so?

Stop obeying, stop complying, stop paying your taxes and refuse the lawful orders of the coproaches.

Yeah, I thought so.

Much of this could have been stopped in its tracks early. Local residents in Philadelphia could have barred the doors of the building the Founding Lawyers were plotting their coup in 1787 and started a bonfire for liberty. Aaron Burr could have shot Alexander Hamilton before the Constitutional ink dried, George Washington’s rather considerable corpse could have had its knees to the breeze decorating a tree at the end of a hemp rope in Pennsylvania during the Whiskey Rebellion and on and on.

Refusing concession to the fetid results of a government-sponsored plebiscite is an act of self-defense. I know we all hear the empirical rubbish of the implied social contract and other such paranormal nonsense. As Lysander Spooner would say today, I didn’t sign shit. I looked through all my legal paperwork in the house and failed to find any document that proves the government owns me and directs me as they wish that I agreed to.

So I want to get this straight as a non-voter. I don’t participate in the criminal enterprise known as voting where my neighbor, family and friends (and complete strangers) are my property to dispose of as I wish if I win a majority. I see this as me showing up at your unjust execution and getting to elect which means they employ to dispose of you. That is morally wrong.

Majoritarian tyranny is morally wrong, bereft of virtue by any estimation. The very concept of participating in a contest in which I must abide by the results involuntarily when I don’t even consent to the results is akin to madness.

As a matter of fact, who in their right mind can contend that voting has made them free? I am all ears for evidence that attends that conclusion.

The fact that the Volstead Act was repealed was an aberration in American history.

As a gun guy, I look at the trail of tears that is Federal weapons legislation since 1934 and scratch my head at any sober Constitutionalist, especially the mentally enfeebled originalists, and wonder how you rationalize your compliance.

But then again, that’s the rub isn’t it? Obedience and fear are the touchstone of all government compliance, the entire received political spectrum has made an art of intellectually connecting the dots on why slavery is preferred much like the Southron apologists for chattel slavery in the 19th century with their elaborate schemes of taking care of untermensch, compassion for the weak minded and the utter lack of imagination to think a group of people could fend for themselves unless under a lash.

A position that eerily resembles the same pseudo-intellectual justifications for tax and regulatory slavery today.

If you vote, don’t complain. You put the leash in your mouth and handed the keys to your cage to a psychopath in a suit. Your clown posse, not mine.

“Be this as it may, they decided by vote which of the books out of the collection they had made, should be the WORD OF GOD, and which should not. They rejected several; they voted others to be doubtful, such as the books called the Apocrypha; and those books which had a majority of votes, were voted to be the word of God. Had they voted otherwise, all the people since calling themselves Christians had believed otherwise; for the belief of the one comes from the vote of the other.”
– Thomas Paine, The Age of Reason

20 thoughts on “Concession is Non-Negotiable: Voting is Moral Vandalism by Bill Buppert”