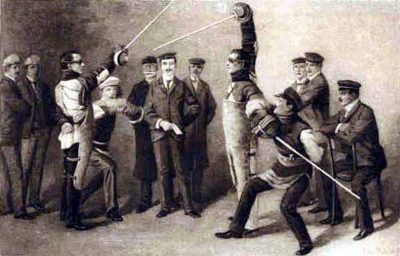 – variously attributed to Pelé, Stephen Hillier, and others

As most know who visit this blog, I am not asking for a law or permission but the decriminalization of the affaire d’honneur; the gaining of satisfaction by challenging dishonorable scalawags to put their money where their myths are.

“While dueling may seem barbaric to modern men, it was a ritual that made sense in a society in which the preservation of male honor was absolutely paramount. A man’s honor was the most central aspect of his identity, and thus its reputation had to be kept untarnished by any means necessary. Duels, which were sometimes attended by hundreds of people, were a way for men to publicly prove their courage and manliness. In such a society, the courts could offer a gentleman no real justice; the matter had to be resolved with the shedding of blood.”

So as then and now, single combat was a primal answer to wringing justice from bad situations.

“The first rule of dueling was that a challenge to duel between two gentleman could not generally be refused without the loss of face and honor. If a gentleman invited a man to duel and he refused, he might place a notice in the paper denouncing the man as a poltroon for refusing to give satisfaction in the dispute.

But one could honorably refuse a duel if challenged by a man he did not consider a true gentleman. This rejection was the ultimate insult to the challenger.”

The modern twist would be more accurate weapons but the dishonored party could have the ability to choose more intimate  and close-quarters weapons if he chose. The defendant in the challenge could always shirk his honor and insist he will not rise to the challenge. That in itself would address some satisfaction to the aggrieved and dishonored party. The market will provide some unique solutions from training salons to escrowed and refereed single combat to weapons specifically tailored to the duel.

I have often thought that not only is dueling an unfairly maligned tradition but one whose application today could stiffen the spine of estrogen nation and put more of a “point” to affairs of honor.  The increasing feminization of society and the rampant overpopulation of metrosexual males blanch at the prospect but it puts the edge to the question.

The Germans even practiced a form that rarely led to death or serious injury in Academic fencing.

I can think of several instances in my own life where this would have resolved a difficulty.  Manners are the lubricant of civilization and alas, they are quickly perishing in America with the resultant coarseness, rudeness and cultural illiteracy that pervades the country today.  Part of this is a result of the loss of classical education, a complete lack of historical knowledge and the increasing prevalence of women of both sexes held high as the enviable male paradigm.  We are a nation with a surfeit of males but fewer men.  Men should know what they are about and have an idea of their measure under arduous or dangerous circumstances.

Some have served in the military; some participate in adventure sports and some in dangerous professions (like firefighters not cops).  Being a cop is one of the safest occupations in America outside of the self-induced pathologies of over-eating, alcoholism and suicide.

Imagine, if one would, that the tens of thousands assaulted and hundreds murdered by the state-sponsored police hordes infesting America were subject to be “called out” by surviving friends and family members. Since the state refuses to sunder the evil trifecta of officer safety, qualified immunity and police unions that make them Murder Inc. across the country, think of the braking mechanism on poor police behavior a potential meeting to seek satisfaction would render over time. I’ve always wondered where are the husbands and male relatives of all these women raped, assaulted, maimed and killed by the statist police in America?

The concept of honor is a dying creed so I expect very few adherents will step forward to advocate for the renewal of dueling as a dispute resolution mechanism. One may even see the emergence of “catch and release” duels in which the object is less than lethal but painful nonetheless.  The Southron will surprise everyone, as they are the first to step in the breech.

Honor would be a necessary preamble to even champion dueling.  Guns or swords?  Let’s make both available as a choice for consenting combatants.  This is consensual violence, both parties must agree to the terms and conditions before stepping off.  While you are at it, take a look at the many tomes of sword-fighting texts available from the Renaissance era in Europe during the high era of fighting salons.  The pity is there are hundreds more which have yet to be translated from the Latin, Italian, German or French into English.

I would again commend your attention to the excellent book, The Compleat Gentleman by Brad Miner.

The duel was the last resort of a process of what we now call ‘conflict resolution’.

I recommend taking a look at Charles Moore’s review of Pistols at Dawn by John Campbell.

He relates the story of two political rivals:

In only one of the eight stories (which also include Gladstone vs Disraeli and Heath vs Thatcher) were “pistols at dawn” literally employed. Exactly 200 years ago, in the middle of the Napoleonic wars, Britain launched a military and naval expedition to Walcheren in Holland. It failed. George Canning, the foreign secretary, sought covertly to blame his rival, Lord Castlereagh, and to have him removed from the War Office.

When Castlereagh discovered what was going on, he wrote to Canning: “You continued to sit in the same Cabinet with me, and to leave me not only in the persuasion that I possessed your confidence and support as a colleague, but you allowed me to… proceed in the Execution of a new Enterprise of the most arduous and important nature, with your apparent concurrence… You were fully aware that if my situation in the government had been disclosed to me, I could not have submitted to remain one moment in office, without the entire abandonment of my private honour and public duty. You knew I was deceived, and you continued to deceive me.” Castlereagh demanded “satisfaction”, by which he meant a duel. The two men met on Putney Heath. Both missed with their first shots, but Castlereagh insisted on a second round and wounded Canning in the thigh, without doing him serious injury.

John Campbell considers the Granita deal about the succession a “devil’s bargain”. He quotes the view of Thomas Grenville, in 1812: “When two men ride a horse, one must ride behind.” He is surely right, but the Brown/Blair story does illustrate the difficulties with which politics is saddled if there is no accepted code of honour.

The form of the duel – with its pointless deaths, inherent injustice and absurd pride – seems to us against reason and morality. But it did answer a problem that always confronts human society: how can one settle a dispute between essentially equal parties?”

I love the idea of this being available to settle political disputes and would hope the modern violence broker (a more correct term for what a politician essentially is) would flock to this. But alas, most of today’s empty suits, especially in Mordor, are moral and craven cowards whose physical courage is challenged by shouting and a real threat would have them cowering and filling their pants. But imagine if an aggrieved constituent could call out the politician(s) who spend so much time shearing the Helots across the fruited plain.

Dueling would put a finer point to Heinlein’s axiom on the polite society. Manners would have teeth again.

“In a duel, man to man, sword against sword, it can be a lack of skill that gets you killed. Often as not, though, it’ll be a matter of luck, or if it goes on too long, then it’ll be the man who tires first that tends to die. In the end it’s about staying power. They should put that on headstones, “Got tired.” 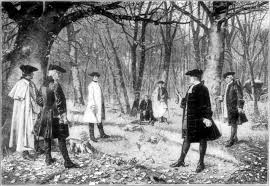 20 thoughts on “Return to Tradition: The Advantages of Dueling by Bill Buppert”