I have written about the cop plague in America for years and a number of readers have asked to see all the essays compiled in one place. Alas, I have written so many I can’t keep track of them but if an enterprising reader were to take the time to catalog them, I’d be happy to put them in one place along with the media appearances where this grisly subject is entertained. You’ll find a brief summary of some of them at the end of this essay.

It bears repeating: immoral means do not yield moral ends and don’t hit and don’t steal is a maxim that benefits everyone except the badged thug-scrum class in the US. Terrorism is the use of threatened or actual violence against innocents to achieve political ends. If that ain’t policing in America, I don’t know what is.  Absent violation of the Ten Commandments daily, the practice of terrorism and the liberal application of wood shampoos on the slightest pretense, what would cops do? The government will never stop creating malum prohibitum crime; it is its bread and butter in power accrual and revenue aggrandizement.

The apparent revelation that cops are more savage and murderous today than past eras is patently false. The primary difference today is the sheer abundance of video and audio footage that consistently demonstrates not only the barbaric behavior of cops but the national sub-culture of lying, document fabrication and collusion with other government elements in the massive American penal complex for whom cops are the primary entry agent for screening potential inmates or corpses. I find the tactic innovative and revealing of releasing the video footage after the official reports are filed by the cops. How do you know a coproach is lying? His mandibles are moving. A two for one in that you prove both the deceit and the malice in one fell swoop.

Since 1972 and the coincident increase in the size and reach of the Federal government in concert with the Drug War, the police state started to metastasize into the cancer it is today. The increasingly militant foreign policy planet-wide after the fall of the USSR in 1989-1991 started to transition the American policing institutions from the petty savagery of localized thuggery to the more sophisticated militarization that has permeated copdom since then. This has been enhanced by Pentagon “leasing” arrangements of military equipment to unleash on the tax Helots, much of it unaccounted for.

The emergence of the Malum Prohibitum State married the coercive monopoly of the Federal government to all its satraps in the 19,000 government-policing jurisdictions throughout the United States. Some worthies of late have expressed fear at the emerging calls for a federalization of all police forces in America. Too little and too late, they are de facto and de jure Federalized since that Drug War inauguration in 1972 but I would date the beginning of this Federal takeover of law enforcement to the adoption of the Volstead Act in 1919. When this is combined with the absurd Palmer Raids and vicious Wilsonian American Protective League, you have the recipe for the unlimited functionality and bleating of every state – national security apparatchik for more laws and powers confined to the Only Ones. This hue and cry gives carte blanche to any government to crush every aspect of individual liberty for the protection of the herd. Thus the new charter of the FBI has become just that.

Street police thuggery is the tip of the iceberg of the barbarous Federal system presently behaving like an occupation force on American soil in every nook and cranny. The two additional components is the rigged and fixed infusion system and gate-keeping in the “justice” system that nominates future inmates for probation, cages and parole; if you think the thousands of civilians murdered by uniformed armed government employees is tragic, it is a mere fraction of the maiming and killing that goes on in the gulag system across the country (and black sites planet-wide for non-Americans caught in the national security dragnet). Both of these components, the “legal system” vetting candidates for cages or extermination and the actual prison system will be a mother lode for future historians to mine and excavate the actual internal workings of these vast gulag complexes because you will not get a true reading of what goes on there now. There is a reason the California prison guards are such an influential political arbiter as a union.

Keep in mind that unions in the government are a wretched cocktail of underemployed state employees matched to a creed of socialism and entitlement that would put a smile on any communist agitator’s face. Apart from war, a legal system is the most lucrative business for government to control. It not only acts as a strong-arming organization for all facets of zoo-keeping the tax Helots across the Fetid Plain for the mountains of revenue lifted at gunpoint from the pockets of Americans; it creates the mass incarceration system that dwarfs the Soviet system at its peak, fills it to capacity and uses this as a primary means to life even more revenue from the citizens toiling to pay for housing all the malum prohibitum violators. More than 85 percent of all inmates in the Federal system are caged for non-violent crimes.

Want to see the system at its entry point without going to jail (yet)? Then spend a day or week watching the proceedings at your local courthouse. You will be aghast and ashamed of the behavior of the ingrates from the overweight bailiffs to the perfumed robed government employees who lord over the proceedings deciding the fates of dozens and ruining the lives of entire families for mostly manufactured offenses with no victim but the state.

And let’s remember; besides the immoral defense that they are simply obeying orders is sufficient they get special treatment in the “legal system” that is preferential to their sainted position as political enforcers. Examine the literally incredible and morally indefensible legal defense of the attorneys for the deputies who flash banged a baby in a crib in GA. You simply cannot make this stuff up.

In his report, Grigg explains how Baby Bou is the chief plaintiff, and notes the claims made in the Tenth Defense (see page 35) that the injuries and damages “were caused by the deliberate, criminal conduct of plaintiffs.” As the department has failed to specifically denote the parents as the plaintiffs, the defense mounted on behalf of Sheriff Joey and his minions focused squarely on the lead plaintiff, the infant who was nearly murdered in his sleep.
The sleeping infant was engaging in criminal conduct. Enough said. This in a nutshell is the state of American policing today. Keep in mind that adults with post-graduate degrees mounted this defense in a government sponsored star chamber in front of a robed government employee with the utmost seriousness.

So what is to be done?

Never ever talk to the police. Except to verbally invoke your right to silence. Modern cops are not only thuggish but act as concierges for a imprisonment complex that is always seeking new victims.

The day that a road pirate stops a motorist for a rule violation on the side of the road and a dozen cars pull over to film the encounter and this becomes a common occurrence things may improve marginally. The more cameras and video feeds rolling whenever the police are conducing their nefarious activities will go a long way toward breaking the government-education-media complex meme that “law enforcement” is a force for goodness and civilization is the flawed premise it is. As Higgs makes clear in the illustration above, this is patently false as the police across the board excuse all their misbehavior on the morally hazardous position that they are simply following orders. This cannot be said enough, if it were not for police, no political bad actor (aren’t they all?) in history could enforce the totalitarian notions that are at the heart of every political action and motivation.

If you don’t have a 360-degree recording system in your car, you are wrong. You should video record any encounter you have with these official occupation authorities. They do not have your safety or welfare in mind, only their own. They are equipped with special rights and privileges that are state approved that are the equal of a license to kill. You stand a much better chance of being struck by lighting twice and mauled by a great white shark at the same time than being attacked by a foreign borne terrorist but the government approved badged domestic variety is far more lethal to your survival than that.

Stop watching police procedurals on television and at the theater. It is all fiction, disinformation, and deception. These may be the most effective propaganda instruments in the last one hundred years beside the constant drumbeat for idolatry to the parchment that started all this mischief in the first place. As revealed of late and historically if you pay attention, fabrication and deceit and disinformation is the touchstone for making such a gross system of rights violation work. Whether the FBI penchant for lousy forensic science or helping foment domestic terrorism, the system is permeated with bad science as the Innocence Project has proven time and time again for the wrongly convicted. How about the hundreds of thousands of untested rape kits littering evidence rooms at police stations across the country? My, my, we would not want to pursue a real crime when illegal vegetation beckons with a chance to increase revenue and dress like obsess soldiers to nab the “bad guys”. Incentives play a huge role in how people behave.

As a matter of fact, don’t subscribe to any non-streaming media service for your Glass Teat. Throw the satellite and cable intrusion out of your house.

There is enormous mis-, under- and non-reporting of police savaging, beating, maiming and killing of civilians in America. There was a popular meme that described how 400 people a year die at the hands of American police every year since 9/11, more than killed by foreign terrorists on that tragic day. I always knew it was a terrifically low number by thousands. And, of course, the Federal government maintains no database to track these killings. Curious in that the Federal government tracks things minutely that have far less gravity but the absence of such accountability serves the political establishment for whom the cop ultimately work. The police are the pointy end of all politics and they will give it you good and hard. So turn the informer meme championed by your government betters on its head. Don’t become part of the government informant state but proclaim loudly through all media you participate in every time a badged thug maims or kills a citizen locally.

And, of course, the ultimate solution to all this tawdry behavior and mischief is the historical rule and not the exception – secession. DC cannot be fixed by anything less. And DC is the Eye of Mordor when it comes to why American policing looks as ugly and murderous as it is today.

This is not a free country and free speech is not unlimited therefore I cannot propose the drastic and most obvious solution to out of control policing in the United States. A cursory reading of history will reveal exactly what that is.

The following is a brief snapshot of some of my earlier coverage and commentary on what is the greatest threat to liberty of mankind. Most likely it is by no means exhaustive of my writing on the subject. 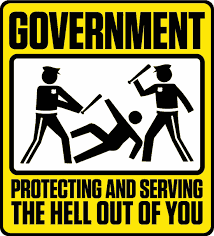 54 thoughts on “US Policing: The Existential Threat to All Human Liberty in North America by Bill Buppert”