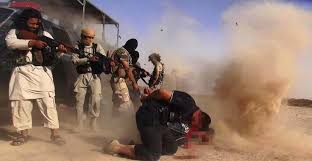 Publisher’s Note: I wanted to thank Joe over at VigilantVote for the inspiration for this essay. He wrote this brilliant take-down of the Western consensus on IS. I have simply taken his analysis a few steps further. -BB

IS, formerly ISIL and ISIS, jumped to the front of the queue as the primary global bogeyman since the Western commentariat was starting to wonder at and wear thin the myth of Al Qaeda as the latest Islamic pandemic to make the rulers fill their pants in naked fear and, in turn, communicate their quaking fright to the masses for their own nefarious purposes. After trillions wasted, two nations in the Middle East no better than before the US occupation and the exponential leap in the surveillance state in the advanced first world, things have not changed much. The Western elites nervously clutch at their handbags and grimace at the sheer numbers of murdered portrayed in the new media and prefer the Western notion of killing folks over time instead of all at once. It’s the bodycounts in compressed time frames that makes government nervous because someone may put two and two together. The Rwandan genocide was a huge corpse-pile in a small time frame and one could almost hear the agonized whispers of the Western intelligentsia urging the Hutu to slow their roll.

All the poster children and intellectual crushes of the collectivists tended to kill millions but did a timed phase of murder en masse.

Tyranny is a matter of perspective.

It’s funny to watch the righteous indignation of the usual suspects as they cry crocodile tears over the savagery of IS yet it is a simple difference of puffs of smoke – human smoke. The IS is savage and barbaric but the American observers are simply upset because they are seeing this kind of mayhem take place at the hands of their Middle Eastern confreres instead of visited with more technological ferocity by Western drones, artillery, close air support, missiles and advanced infantry weapons wielded by the occupiers. One wonders that if IS had more uniform clothing and more sophisticated armaments if the West would simply offer another polite golf clap to the atrocities in admiring approval. Graybeards smiling sagely and thinking that’ll put the fear of God in those rabble.

The New Orwellian version of the Marshall Plan has not created first world nations out of nations of Middle Eastern rubble. The government has discovered the wars serve two primary purposes: paralyzing independent thought in the booboisee in the rush to war and the rich plunder divined by the military industrial complex laundering the stolen monies at home and abroad. These two elements lead to the most important reward of all for government supremacists: a means to test and socialize various instruments of power to better fleece and rob the resident tax populations. After all, it was Milton Friedman who gave us tax withholding during the War to Save Josef Stalin. The recent conflicts have allowed demonstration projects for biometric registration of captive populations and the comprehensive testing of drone technology. All of that is coming home because empire always comes home.

Same as it ever was as the latest mouthpiece in the Offal Office reads the same fascist agitprop off the teleprompter day after day. One observation stands out: name the last time any occupant of the WAFL (War Against Freedom and Liberty) House actually delivered true liberty.

True liberty in this case is not legalization, rollback of laws or the elimination of an executive agency. True liberty is actualized in one true sense, when the statist enforcers arrive at your house, bust down your door and attempt the kidnapping and/or murder of you and yours, free man tolerates the violation.

Pop quiz, hotshot: if normal humans without the anointment of magic police fairy dust busted heads and caps on a daily basis for something as banal as a seatbelt violation, would those humans be shunned or hunted? Some will say: “…but isn’t that a violation of the Z/NAP?” Short answer is only if the occupants of the home were legitimate thugs who had violated the Z/NAP themselves but the lion’s share of the assaults by skin-headed overweight state praetorians are errand-boys for the legal system apparatus built on malum prohibitum law that has nothing to do with actual crimes because in most cases there is no victim and they are crimes only because the rulers say so.

You see, murder begins where self defense ends and since time immemorial the thuggee cults known today as nation-states derive their power through two primary means: legalize theft and plunder to derive the means to pay enforcement elements the specie to enforce a power monopoly by the government. There, it does not get any simpler than that. In essence, the government has to earn in order to maintain its apex position on top of the tax cattle and enforce the laws and regulations it vomits forth in a vicious cycle that exterminates every aspect of liberty and human volition it comes across. I am convinced that the only reason the government did not have a sophisticated theft mechanism in place at the time of the Founding Lawyers at the Constitutional Coven was the inadequacy of surveillance, lack of maturation in accountancy techniques and a sheer lack of mandarin bureaucracies at its disposal to plunder the hapless citizens.

Even the most undeserving Great Captain of History, George Washington, had a clue when he wasn’t having foul statist séances with his evil medium, Alexander Hamilton. To wit: “Government is not reason; it is not eloquent; it is force. Like fire, it is a dangerous servant and a fearful master.” On reflection, I think he smiled on the inside as he said this once he had secured the noose of the Constitution around the neck of the briefly free colonies (1783-1791). Little did the nation know the fire chief was also a sadistic arsonist as the hapless tax resisters would discover during the Whiskey Rebellion.

Cue the righteous indignation by the usual suspects for me skewering the early opportunists who set the pattern for the horrific excesses and wars against liberty waged by the Office of the President on a daily basis since then. With solitary exceptions like Grover Cleveland, the creatures haunting Mordor would make the cast of House of Cards look like a Sunday bridge club.

There is nothing new about IS; simply a more raw and embryonic version of the barbarism and savagery that is government today. The clerics are just emulating their alleged betters in the West to catch up to the sophisticated and organized abattoirs the US has fashioned at home and abroad. First response against the accusations of moral relativism would be the national acceptance in both fact and circumstance of mass infanticide and the veritable tidal wave of police violence against the rest of us with zero accountability across the board across the fetid plain. ‘Murika…

Per the cries that IS may be coming here to the US, they will simply join the fray in progress since absent terrorism, the state cannot conduct its daily business.

Government is a death cult and IS may simply be the latest variant. Your government wants you to view IS as a threat and not as the ally they truly are in the holy quest to pave the planet with monolithic government nonsense.

Protect yourself from both with weapons and the knowledge to use them effectively. There is no man on a white horse, no liberty reinforcements and no one to rescue you from your own keen moral dilemma.

The decision is yours.

8 thoughts on “Same as It Ever IS: Just Another Government Threat by Bill Buppert”