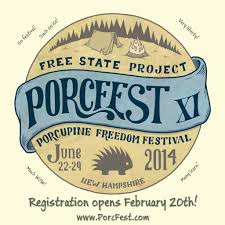 I will be attending and speaking at Porcupine Festival 11 next week in New Hampshire. I will be giving three speeches, participating in an abortion debate (I am pro-life) and conducting a half-day seminar on Irregular Warfare: History and Practice on Saturday. I will also have two additional speeches to fill in for no-shows.

I will also be interviewed by Jeff Berwick of Anarchast and hope to get a some additional media events while there.

Zerogov: Limited Government, Unicorns and Other Mythological Creatures A tour of my evolution to abolitionism, the Constitution as an engine for big government, why abolitionism and an invitation to join the brotherhood Without Banners.

Police State USSA A tour of the American Stasi state, the growing murder culture of cops, incentives to police violence and remedies for the existential problem of the police state.

Abolition and the Stoics A history of the most practical philosophy in the world and its relationship to liberty.

I Am Simon Jester: Grokking the Underground An examination of the history and practice of non-violent undergrounds and movements.

19th Century Abolitionists and the Modern Movement: Lessons in Resistance to the Maximum State An overview and examination of the efforts of William Lloyd Garrison and Frederick Douglass and how it may have been another bulwark for the fight against the state.

PorcFest Abortion Clinic I will be on the panel to defend the pro-life position.

Irregular Warfare: History and Practice A half-day seminar on the history and modern implications of asymmetrical warfare, insurgency, counterinsurgency and guerrilla conflict.

The Free State Project sponsors the events and I look forward to meeting any of my readers there.

It will be great to see old friends and make new acquaintances.