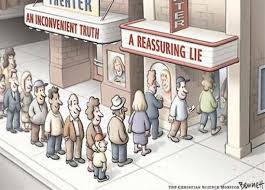 It may be a tired saw that politicians lie but the truth to the notion bears examination.  The libertarian enterprise outside of the Libertarian Party apparatus is essentially a non-political undertaking. It is trying to tease out and liquidate the political form of organizing societies. The freed market, spontaneous order and voluntary nature of the anarchist society means that compromise cannot be reached via initiated violence so what has become the easiest route to a societal forcing function cannot be leveraged.

Collectivism is based on deception, disinformation and lies; it has to be.  No sober humans in their right and moral minds would countenance the casual brutality and bloody-mindedness that is beneath the surface of all contemporary political rhetoric and action.

We often hear of the National Socialist and Communist uses of the Big Lie to keep populations under the boot and the self-congratulatory tone of modern democratic supporters in the West of the superiority of their societal constructs.  All sheer poppycock and a rhetorical shield to hide the fist and the lash. The very fundamental elements and public drapery of anthems, flag waving and political speeches are merely props and theatrical devices used to make the pig look more handsome and the smell of offal more appealing.

Why do you think every modern politician except Ron Paul tailors their speeches and bromides to the demographics of their audiences?

Terrorism is the threat or use of violence against non-combatants and innocents to achieve political goals.  A textbook definition of what a state is.

From Plato to Karl Popper to Leo Strauss, all parts of the political spectrum have used the “noble lie” to grasp for and maintain power at the expense of the remainder of all communities because they know what is best for the rest of humanity in their neck of the woods.

If you learn one thing from this exposition of the intuitively obvious, it is that outside of libertarian circles, truth has a whole new meaning and the destruction of it and exploitation of the lie is the foundational concept in the pursuit of all political power.

Is there a litmus test available?  Occam’s Razor shows one that is elegantly simple: whatever a politician or their mediums in the media say, ask yourself if it advances the maintenance or expansion of state power?  They will lie to ensure that is the case.

1 thought on “Truth and Collectivism by Bill Buppert”