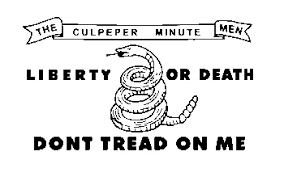 I slammed the hood shut on a car I was working on the other day, and something caught my eye. There was a sticker on the windshield that struck me as odd, and immediately I couldn’t help but notice the irony. It was a picture of the Culpeper Minutemen, and the sticker happened to be a county tax sticker.

For those who don’t know what these stickers are, they represent that you have paid the yearly tax on your private property–your vehicle. The sticker is placed on the windshield so that the King’s Men know to back off as you drive on the King’s roads-all licensed, registered, and subjugated. A sticker that is up-to-date will help to ward off unwanted attention from armed tax collectors. As one who thinks it is absurd to have to place a sticker on my vehicle to prove that I’m being an obedient subject, I couldn’t help but laugh out loud a bit when I first saw this stupid sticker.

Any Riflemen in this area knows The Culpeper Minutemen were a group of men who were formed under the same oak tree–not once, but twice to fight off centralized tyranny–and now they are immortalized on a tax stamp.

Fitting for the times we find ourselves in.

Last year I wrote an essay just before Independence Day, and I started the essay out with this quote from Frederick Douglass.

“My subject, then, fellow citizens, is American slavery. I shall see this day and its popular characteristics from the slave’s point of view. Standing there identified with the American bondman, making his wrongs mine. I do not hesitate to declare with all my soul that the character and conduct of this nation never looked blacker to me than on this Fourth of July!”

This Douglass quote rings just as true today as it did for him back then.

The North Korean government claims for itself the power to tax the personal wealth of its slaves anywhere in the world; not only within their imaginary borders. There is also another government that claims to have the same power to tax beyond their arbitrary, imaginary borders. They claim they are able to flex this power until one has renounced their “citizenship”. Anyone care to take a stab at what tyrannical government might claim this power?

Recently, the United States Attorney General, Eric Holder, switched out due process with what I now call “do process”. Let me explain what that means. Instead of following due process, that is, instead of respecting all of the legal rights that are owed to a person–including the right to face one’s accuser and have their day in court–the DOJ now just has to do this process, and the Rule of Law remains intact and legitimate.

First, the U.S. government has determined, after a thorough and careful review, that the individual poses an imminent threat of violent attack against the United States; second, capture is not feasible; and third, the operation would be conducted in a manner consistent with applicable law of war principles.

If they decide that–after a thorough and careful review, of course–there is sufficient evidence to show that you are an imminent threat to the United States (which means the US government), they will drop a hellfire missile on your head. This is why I say due process has been switched out for “do process”. I mean, they did something, right?  Sure, it may be arbitrary and completely contradictory to the Rule of Law–the very concept this Nation was founded on–but hey, it’s close enough for government work. If other human beings die because they just had the bad fortune of standing next to the person that was deemed to be an imminent threat, well….

That’s just part of the process.

The tyranny bubble that this government is creating will swell and pop just like any other government subsidized bubble, but first we get the pleasure of experiencing Lord Acton’s maxim of “Power corrupts, absolute power corrupts absolutely”, first hand. The power to tax you and kill you–without due process, anywhere on the planet–is now in the hands of scoundrels. But this Independence Day I will be in a sea of red, white, and blue rubbing shoulders with people who have no clue what is going on, or more importantly what lays just over the horizon.

I could go on and on about the enslavement and tyranny human beings are experiencing because of government-Federal, State, or local, but I’ll bet the readers of ZeroGov are fully aware of it, so I won’t waste their time. Which brings me to the point of this essay; this Independence Day, I will be sporting attire that is appropriate for a funeral: Black. I would like to see others join me in the hopes of engaging in a little bit of lite Independence Day activism. Inevitably, in the course of the day’s festivities, I will be asked why I am wearing such dark dress, and I will explain that I am dressed accordingly; I will explain that I am dressed for a funeral.

I’ve come to find that black is a much more appropriate color for myself anyway.

3 thoughts on “Dressed for a Funeral by Chris Dates”