“Now something must be done about vengeance, a badge, and a gun”
-Zack de la Rocha 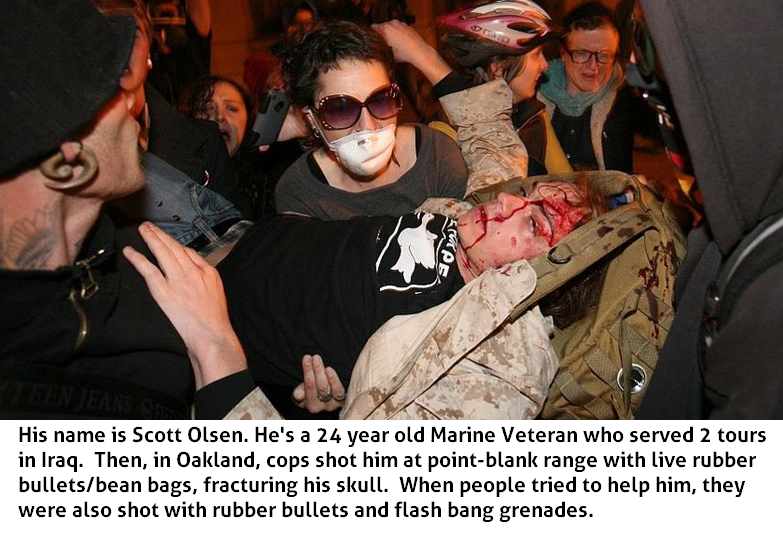 The picture above is probably the most powerful picture I have seen in a long time. As my mind dissected this picture, I had a thousand thoughts, and not one word. I had read the caption under the picture so I knew this young man’s name was Scott Olsen. I know he is a 24 year old Marine Veteran, and he had served two tours in Iraq.

This man is laying bleeding from his head in the arms of people he has probably never met. He has part of his military uniform on, perhaps a uniform he was issued. It looks like he has some kind of military pack on. The pack is splattered with blood, and his hair is matted into the blood on his forehead. This Marine is badly in need of medical attention. As this young man lay horizontally in the arms of strangers, his unbuttoned camouflage blouse had draped to either side of him. Under that blouse was a black undershirt with a white dove pictured on it. I stopped and focused on that dove for a minute. The photographer had managed to place it almost directly in the middle of the picture. My eyes were stuck on that dove as I wondered what events had taken place in his life that drove him to be an advocate for peace. Words can not accurately describe the power of this picture, so I won’t even try. If it was up to me, one of these pictures would be handed out to every returning soldier with these two words, “welcome home.”

All of these thoughts quickly disappeared when I thought to myself, why is this man not on a stretcher? Why is this man being cared for in this manner? Why is he being carried around like this?

Then I watched the video….
https://www.youtube.com/watch?feature=player_embedded&v=zEj_4fqDbnM
That is a War Zone.

That young man was in a war zone. Many things have been said about the OWS protesters, and they have been called many names. I’d like to add one more name to the protesters who got this young Marine the hell out of there: Heroes.

It’s not everyday that your average American works up the courage to run into a situation where flash-bang grenades are being used; where tear gas canisters pop all around them; where they are being fired upon with rubber bullets and bean bags by those who have sworn to protect them. To watch that video is to witness bravery in action. I do not want to give commentary on the video, because like the picture above, it speaks for itself. Please take notice of the flash-bang grenade that is thrown by a member of law enforcement into the crowd of courageous folks who went back into harm’s way to try and rescue this man.

One word came to my mind when I watched that video: chaos. Chaos caused by jack booted thugs under the authority of the state. Chaos is the reason most folks I talk to reject the stateless society. They are unable to see that it is the state that causes chaos. Authority without accountability is chaos. It’s always the same excuse, chaos will ensue if we have no government. To those who would say this, I would ask this question; what the hell do we have now? It sure ain’t order.

If there is one thing the OWS movement has been good at it’s pointing out the real occupation force in this country: American Law Enforcement.
This essay was written from occupied territory.
Resist.

5 thoughts on “One Nation Under Occupation by Chris Dates”