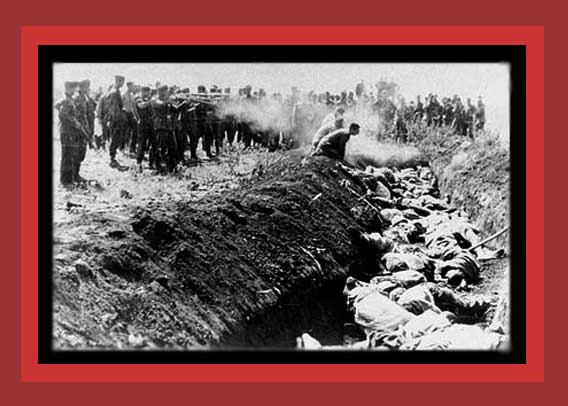 Government is a death cult. It is the most profound mechanism outside of planetary extinction events to rid the globe of human beings.  There have certainly been disease vectors like the plague in medieval times that wiped out significant parts of Europe but even that can be attributed to human volition to a certain extent.

Since the first agricultural communities attracted the government predator’s eye thousands of years ago and led to the tax accountancy records Charles Adams first pointed out to us.  Hunter gatherer communities were quite a bit more difficult to pin down and cage within the confines of a tax jurisdiction.  Tax jurisdictions are the center of gravity for governments to germinate and expand their nefarious enterprises.

Whether the murderous paroxysms of violence in the endless wars created by tax jurisdictions dressed in fancy bunting and flags in ancient times or today have more advanced killing machines, the mission is the same.  Peter McCandless is fond of saying that a government will ultimately kill you for non-compliance of a seatbelt violation if your lack of obedience and insistence on resistance continues and escalates.

The more extreme examples of bureaucratized slaughter and mayhem visited on populations by governments are illustrative of the potential of every government to do the same. That is the genius of government, not only to elevate the absolute worst psychopaths to positions of power because they seek to rule others by default but it industrializes murder machines.  How else can one explain the killing fields in Kampuchea, the bone yards in the former USSR and the mass starvation campaigns either inadvertently or intentionally launched against subject populations?  From Rwanda to Armenia under the Turks to the North American aboriginal destruction in 18th and 19th century America, governments kill.  That is their ultimate failsafe mechanism.  If their power is threatened in any fashion, the cage and the sword and the grave are essential tools of governance.

Many thanks to Dr. Rummel for the research he has pioneered in this effort.

The Russian attempts to starve significant parts of the Ukraine under Stalin’s reign:

Conquest quotes the later testimony of an activist:

“I heard the children…choking, coughing with screams. It was excruciating to see and hear all this. And even worse to take part in it…. And I persuaded myself, explained to myself. I mustn’t give in to debilitating pity…. We were performing our revolutionary duty. We were obtaining grain for the socialist fatherland….

Our great goal was the universal triumph of Communism, and for the sake of that goal anything was permissible — to lie, to cheat, to steal, to destroy hundreds of thousands and even millions of people….

This was how I had reasoned, and everyone like me, even when…I saw what “total collectivization” meant — how they “kulakized” and “dekulakized,” how they mercilessly stripped the peasants in the winter of 1932—3. I took part in this myself, scouring the countryside, searching for hidden grain…. With the others, I emptied out the old folks’ storage chests, stopping my ears to the children’s crying and the women’s wails. For I was convinced that I was accomplishing the great and necessary transformation of the countryside; that in the days to come the people who lived there would be better off for it….

In the terrible spring of 1933 I saw people dying from hunger. I saw women and children with distended bellies, turning blue, still breathing but with vacant, lifeless eyes…. I [did not] lose my faith. As before, I believed because I wanted to believe.”

You will note here on this page that delineates anthropogenic killing globally that it wasn’t simply the bad communists (although they get the gold medal in sheer numbers) but the UK was responsible for 4 million Indian dead in Bengal during Churchill’s little known escapades raping India during WWII in 1943 (a passing mention of the possible 20 million dead during the Indian famines of 1876-78 and 1899-1900)  or the 1.5 million dead during the Irish potato famine[s] in the 19th century.

The Black War (1828-32) in Australia against the aboriginals is especially terrifying because they almost managed to exterminate every man, woman and child.

I mention these western holocausts to illustrate that history’s traditional mass murderers, the Communists and Socialists, aren’t the only authors of such barbaric behavior.  Mind you, plenty of this behavior took place outside of acknowledged warfare such as Stalin and Mao’s efforts to kill the non-compliant and disobedient.

In the end, ALL governments seek to maim and kill the non-compliant because obedience is the signal contribution of ANY citizen in a tax jurisdiction yesterday, today and tomorrow.

In America, absent the overwhelming presence of armed bureaucrats, how many of even the most brain-dead subjects in America would comply with a fraction of thousands of intrusive and destructive laws on the books?

Your collaboration with a system that practices such barbaric behavior on a mass and industrial basis is the key to government’s legitimacy and its very ability to have fractional elements of tens of thousands of “law enforcers” cow millions of shambling sheep to be disposed of as the government wishes; especially the recalcitrant and rebellious black sheep who no longer desire the fetters and are increasingly losing their fear of the noose.  Why do you think that “officer safety” happens to prize the value of the cop’s life higher than any mere citizen or subject?  One recalls that scene in Braveheart where the King’s aristocrat declares that an assault on the King’s men is an assault on the King himself.  How romantic.  As Aleksandr Solzhenitsyn said:   “Any man who has once proclaimed violence as his method is inevitably forced to take the lie as his principle.”  Initiated violence is the government’s bread and butter and any active defense against its depredations is always received by the rulers rather dimly.

The only reason you are not yet dead is because the government has not found a sufficient reason or lacks the wherewithal to kill you. Yet.

“There are no morals in politics; there is only expedience. A scoundrel may be of use to us just because he is a scoundrel.”

12 thoughts on “Government is a Death Cult by Bill Buppert”