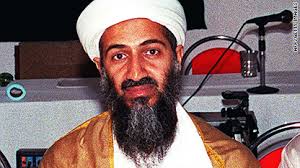 This morning I woke up to hear that the man that kept my family and I in a constant state of fear is dead. Osama Bin Laden was killed during a commando raid somewhere in Pakistan. Hooray! We got him! Finally, after all of these long years, living in a perpetual state of terror is over! Does this mean we can check out at Wal-Mart without Janet Napolitano lecturing us? Does this mean that we can travel without being molested by government agents? Does this mean some patriotic country singer will try and capitalize on this good news? Man, I sure hope so!

I had a voice mail when I woke up this morning, it was my brother. He is ten years younger than I am, and does not think the way I do. He said, “Chris, check the news, it’s about Bin Laden! WE killed his ass!” I thought to myself that “we,” well, that implies me, and I killed no one. I mentioned the word “we” in the first paragraph quite a bit, because it just seems to be engrained in our minds. Exactly what does “we” mean? When my brother said “we” he was referring to the US Government. I am not part of the US Government, and neither is he. Sure, agents claiming to be from the Government steal our money to fund themselves, but does that make us a part of it? If some gang of thugs came to your home and robbed you, would you say “we” robbed my house when you reported the crime to the police? Of course not! So why does everyone use the word “we” when referring to the US Government, or any branch of the Government, including the Army?

The mainstream media is now reporting there might be some “terrorist” retaliation due to the killing of their mastermind, Osama. I’m a little confused here. When he was alive we had to constantly be in fear for our lives, but now that he is dead, it might be worse? Well shoot, maybe “we” should not have killed him. It seems “we” are damned if “we” do, and damned if “we” don’t.

I wonder something: will the same people that say “we” when referring to the killing of Bin Laden, still claim “we” when referring to “collateral damage”? Will these same people that group themselves in with murderers and thugs, still take responsibility for killing children, and other humans? Will they take responsibility for the fact that “we” have made many more “terrorists” with the killing of innocent humans? Those that group themselves in the “we” category, ask yourself this question. If an occupying force killed your family, what would you do?

I will not give any details about Osama Bin Laden’s killing. I am not a MSM reporter, and I will leave the propaganda up to them. I am only a country boy with an opinion. I will leave you with this thought: those that say “we got him!” should go to your computers, use your favorite search engine, and type in Middle East collateral damage, then look at the pictures and say to yourselves: “WE shot them!”

To all of those that say “we,” know this: you do not include me.