Publisher’s Note: We launched the Zero Gov Forum less than a week ago and the response has been overwhelming.  I wanted to thank everyone for the honor bestowed upon us.  On another note, most of the Zero Gov staff will be on the range for four days for a shooting class so posting will be scarce until Monday. -BB 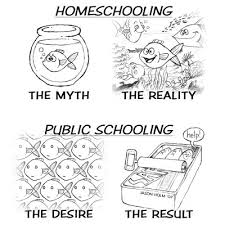 I would like to dedicate this essay to my wife, Lilo, who has home-schooled four children and inspired the homeschooling of countless others.

“A society of sheep must in time beget a government of wolves.”

There are many reasons people choose to home-school that run the gamut of the political spectrum from the Left to Right.  I would daresay that most homeschoolers are Christian.  I suspect that far more people homeschool and hail from a right leaning perspective.   We are in the minority as secular homeschoolers who teach from a curriculum of traditional canons in whole texts and mastery of Latin.  We are in an even smaller minority in that we are not neoconservative Republicans cheering on the crusade to make war on the world to make it safe for whatever we have in store for it as a country.

As a family, we don’t seek to replicate government school at home but use the advantage of one on one tutorship to advance learning and make the children more self taught and able to master their own compass in where they want to be in their school career.  While we are sympathetic to certain aspects of unschooling, we remain completely unconvinced that children are competent and capable to know what life skills and learning they require to become free moral agents in adulthood able to captain their own destinies.

While I would certainly characterize our family as philosophically anarchist, we cast a skeptical eye at those libertarians who consider parenthood a form of child abuse and that all childrens’ rights should match those of seasoned adults.  Any responsible parent knows this is a flirtation with disaster.

How compatible is home-schooling with the advancement of a liberty embracing philosophy?  There is no other way it will happen.  Hitler is reputed to have said that if I have your child from age seven, I will have him for life.  I recall watching the brilliant Ang Lee film, Ride With the Devil, and one of the protagonists insists that the Yankee insistence on opening schools immediately after occupation during the War of Northern Aggression  is the beginning of the end.  One could suppose that without government domination of schools from pre-school to post-graduate studies in America; our political landscape would look considerably different.  K-12, quite simply, is a mind laundry to convince the hapless students that the government is the sine qua non of all civilizational advancement and no other view will be tolerated punctuated with the sound of periodic Pavlovian bells so they shamble to the next exercise in statist adulation.

Need evidence?  Spend the day with your child in a government school and have the misfortune of perusing the stacks in the library.  Talk to the teachers and the staff.  It will prove to you that an education degree is probably one of the most useless degrees granted in the history of university education next to the degree programs that give doctorates to the likes of Paul Krugman.  Government has truly turned the education of students at all levels into a university instead of a hetero-versity that respects different conclusions and opinions outside of the accepted government supremacism discourse.  It breeds one outcome – obedience to the state.

If we seek to create a society that is based on decentralized anarchist principles embracing the notions of voluntarism, persuasion, peaceful interchange, free markets and adherence to a non-aggression principle then homeschooling or deregulated community schools catering to these vagaries is a vital part of the program to rebuild our societies.

You cannot build a house of freedom if all the workers are slaves.

Spontaneous order cannot be centrally planned.  The entire education structure in America is based on a Soviet-style model of central planning laced with political objectives that prize compliance and obedience above learning first and foremost.  This system can never be changed and must be abolished.  Historically, the modern school system is a little over a century old and it has proven to be perfectly compatible with creating subjects and absolutely deadly to thinkers.  Students in university systems here succeed in spite of the obstacles put in front of them pedagogically and cognitively.  The hurdles are enormous.

There a number of formidable obstacles to homeschooling outside of the need for a single income stream from one working parent and the additional burden of still paying property taxes that are freighted with the costs of the government “gun-run” schools in your district.  The commitment is huge on the part of the parent who remains home to teach and to do so for the fourteen years we have is even more difficult.  It is worth it because if the idea of teaching your children well is the goal of good parenting, then the government schools will always run a distant second.  The gun-run schools are literally turning your children into the mindless and shambling drones you run into every day at the mall, in town or in a restaurant bordering on illiteracy and innumeracy making them vulnerable to the statist swan-song of surrendering their liberty for security.  This is drummed in to them every waking hour.

Homeschooling is one of the ways to pave the way for a free society; otherwise, you have not only surrendered your responsibility to your children but have forfeited any future chance at freedom they may have.

“The plain fact is that education is itself a form of propaganda – a deliberate scheme to outfit the pupil, not with the capacity to weigh ideas, but with a simple appetite for gulping ideas ready-made. The aim is to make ‘good’ citizens, which is to say, docile and uninquisitive [sic] citizens.”
~ H. L. Mencken

6 thoughts on “Home Education For Freedom by Bill Buppert”