“Every actual state is corrupt. Good men must not obey laws too well.” 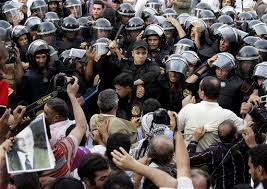 Once again, a tax jurisdiction is in lather over the cattle objecting to their treatment and fleecing by their rulers.  Egypt is suffering severe unrest that is likely to bleed over into other Arab nations including the ones currently militarily occupied and brutalized by American forces in Iraq and Afghanistan.

The US sponsored Thug for Life, Hosni Mubarak, is a friend of Israel and the recipient of the second highest level of military aid (1.3 billion per annum) from the US to a country we are not overtly occupying.

While Greece and Ireland are most likely harbingers of our economic future, Egypt is a close analog to our political future once the cattle in America wake up from their taxpayer subsidized slumber and realize that their future is much grimmer than the footage they are seeing of Egyptians in the streets.  Egypt has been in a state of emergency since 1981 which, of course, permits the government a carte blanche use of police excesses to control dissent and keep the people in constant fear of detention, torture, maiming and killing.  A common thread indeed with the rest of the governments on planet Earth.

Of course, Al-Jezeera has just been shut down and the internet suffered some blackouts but this is common in countries where the repression and treatment of citizens, if viewed by everyone, would call attention to the inhumanity of the government’s behavior.  It is amusing to see the US State Department scolding its subsidized child in the Middle East for unseemly behavior – once caught in the act.  The government of the US has not, incidentally, been insistent on observing human rights but has been disappointed in the tepid collaboration of the Egyptian government in the prosecution of the unwieldy and brutal War on Terror.

Egypt is acknowledged across the board by a number of indices to be “not free” and “authoritarian” [Editor’s note:  When one looks at the standard definition of authoritarian, no government in existence can escape the moniker].  During the Cold War, it was common practice for the US government to ally itself with other noxious regimes to keep the Great Game in balance but the only reason it appears to continue with the Russian leaving the world power stage is US insistence on creating “friendly” authoritarian regimes in key strategic pockets to serve the US military-industrial complex.  Egypt serves both this function and the reward for being the “house Arab” that pays obeisance to Israel.

Reporters Without Borders ”place[s] Egypt 143rd out of 167 nations on press freedoms”.  There are probably plenty of Washington political salons looking longingly at the suppression of ideas in the country.  Human rights from women to homosexuals to detainees is abominable.

Torture is a national policy used by the Mubarak government and abetted by the united States. While the government denies the allegations, lurid and macabre stories of torture abound:

While detained in September 1996 at al-Muntaza Police Station, Alexandria, Mohammad Badr al-Din Gom’a Isma’il confessed under torture to having killed his nine-year-old daughter, whom he had reported missing in February 1996. When he was summoned to the police station on 1 September 1996, he had expected to be questioned about his missing daughter. However, the body of a young girl had been found which the police claimed was his daughter, and he was accused of her murder. The following day, Intissar ‘Abd al-Galil Gad, Mohammad Badr al-Din Gom’a Isma’il’s ex-wife and mother of their daughter, was also detained and beaten with a stick on her legs. Mohammad Badr al-Din Gom’a Isma’il described to Amnesty International delegates how he was beaten while suspended from a door and subjected to electric shocks, including to sensitive parts of his body.

The most common methods which continue to be reported are electric shocks, beatings, whipping, suspension by the wrists or ankles, suspension in contorted positions from a horizontal pole and various forms of psychological torture, including death threats and threats of rape or sexual abuse of the detainees or their female relatives. Usually victims are blindfolded to prevent them from identifying their torturers. 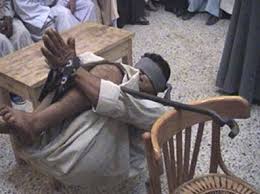 Police and the SSIS (State Security Investigative Service) reportedly employed torture methods such as stripping and blindfolding victims; suspending victims by the wrists and ankles in contorted positions or from a ceiling or door-frame with feet just touching the floor; beating victims with fists, whips, metal rods, or other objects; using electric shocks; dousing victims with cold water; and sexual abuse, including sodomy. Victims reported that security officials threatened them and forced them to sign statements for use against themselves or their families should they in the future lodge complaints about the torture. Some victims, including women and children, reported that security officials sexually assaulted or threatened to rape them or their family members. Human rights groups reported that the lack of legally required written police records often effectively blocked investigations. 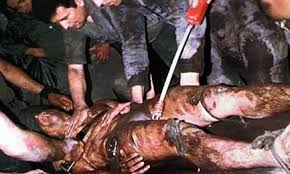 As horrific as this sounds, there are Constitutional safeguards in place but they simply pay lip service to them:

”Any person arrested, detained or [has] his freedom restricted shall be treated in the manner concomitant with the preservation of his dignity. No physical or moral harm is to be inflicted upon him. He may not be detained or imprisoned except in places defined by laws organizing prisons. If a confession is proved to have been made by a person under any of the aforementioned forms of duress or coercion, it shall be considered invalid and futile.”

Like all governments planet-wide, the language is nice but contrary to daily practice.  Constitutions, much like our own country, are used to placate the ignorant and patriotic who are blinded by either fear or misplaced allegiance to a greater entity than themselves.  Giving the lie to one of the primary reasons for the existence for the United Nations, the Egyptian government has signed on to charter after charter:

Under Article 151 of the Egyptian Constitution, international treaties become part of national legislation after they are signed by the President of the Republic, ratified by parliament, and published in the official law gazette.

What good do any of these promises and declarations do when Egypt will simply do whatever it has to do to preserve its exclusive monopoly on force especially with the vile internal security and police apparatuses the US helped to build or look the other way?  Nothing to see here, move along, citizen… 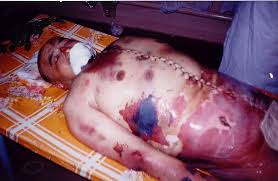 Enter the universal menace against human decency and freedom:  police forces.  The behavior of the police in the recent days during the present rebellion is nothing new in Egypt.  Here are some enticing anecdotes from the annals of Egyptian cops and their greatest hits in 2007 and 2008:

On March 24, police officers in Tanta killed Eid Ahmed Ibrahim by driving a police van over the victim, who was trying to prevent the arrest of his brother. An estimated 2,000 villagers protested, accusing the police of deliberately killing Ibrahim. On November 15, Tanta Misdemeanor Court sentenced police officers Mohamed Sadaawi and Ahmed Abdel Aal to three years in prison, ordering each to pay LE 10,000 ($1,800 compensation). The verdict is subject to appeal.

On October 9, a police officer in the town of Samalut allegedly killed a pregnant woman, Mervat Abdel Salam Abdel Fattah, while searching for her brother-in-law on suspicion of theft. The case remained pending at year’s end.

On November 23, a police officer in Aswan, Mohamed Labib, allegedly shot and killed Abdel Wahab Abdel Razeq after apparently entering the wrong apartment in pursuit of a drug dealer. During the demonstrations that followed the killing, an elderly Aswan resident, Yehia Abdel Hamid, died from inhaling tear gas that the police had released. On November 25, the government detained police officer Mohammed Labib for his suspected role in the killing.

Security forces used lethal force against protesters in other instances. On April 6 and 7, security forces killed four protesters during violent clashes between police and protestors in Mahalla el Kubra, a textile town in the Nile Delta. Police used live ammunition, rubber bullets, and tear gas to suppress protests against low wages and price hikes on basic goods. Among those killed was 15-year-old Ahmed Ali Mabrouk Hamada, whom police shot on April 6 in his family’s apartment near Mahalla’s Jumhuriya Square. At year’s end the government had not taken any corrective action to prosecute the police officers responsible.

Also, on November 11, Civilian Security Forces (CSF) killed three Bedouin tribesmen in the North Sinai during demonstrations that followed the November 10 CSF killing of a suspected drug smuggler. The government did not take public action to investigate these killings.

The police structure follows:  The MOI (Ministry of Interior [like DHS in America but more poorly funded but the same idea] controls local police forces, which operate in large cities and governorates; the SSIS, which conducts investigations; and the Central Security Force (CSF), which maintains public order. SSIS and CSF officers are responsible for law enforcement at the national level and for providing security for infrastructure and key officials, both domestic and foreign. Single-mission law enforcement agencies, such as the Tourist and Antiquities Police and the Anti-Narcotics General Administration, also work at the national level.

The documented abuses are immense and we all know that documented abuses are the tip of the iceberg when it comes to police misconduct which, with rare exceptions, are under-reported and, even in America, are usually given short shrift by a mostly imbecilic and obsequious media which loathes criticism of the police at any level.  The government opposition would not be bloodied and beaten and murdered if not for the single guarantors of obedience and oppression throughout recent history: cops.  Do you suppose American cops will act any different if ordered to return “public [government] order”? 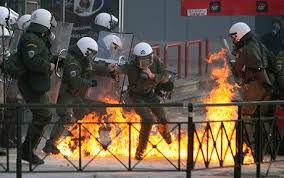 It does not take a keen observer to see that the police mechanisms enforcing the “state of emergency” in Egypt under Mubarak’s reign (and arguably under the previous long line of tyrants) have been the fulcrum of oppression without which these riots would not be occurring.  The population has reached a critical mass of exhaustion living under such circumstances and the explosion of unrest has come boiling up.  Sometimes it takes decades like in the USSR and its puppet regimes and sometimes a few days in the Philippines in the 1980s, to vanquish a dictator.  Unfortunately, others are queuing up to take their place as they fall

The repression, torture, economic displacement by socialist nonsense and general eradication of human freedom has doomed Mubarak to join that special band of displaced dictators in exile or death.  It is inevitable now because the genie is out of the bottle and unless a scorched earth policy is employed, leadership will change.

The bad news for America is that what you see on your screens of the protests is coming to a city near you.  It will be just as bloody and unforgiving but far worse for us because we have a far higher standard of living to fall from and a far more lethal regime in DC that will lash out violently when cornered and called out for decades of abuse and economic stupidity. 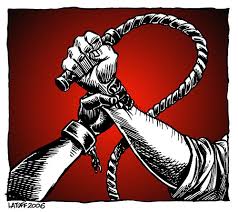 Government is fear, pure and simple.  Otherwise, you would not obey most of the edicts nor would you be facing the unthinkable economic calamity that awaits America.  Its power is to fine, trap, detain, cage, maim and kill citizens who refuse to comply.  In America, that compliance has cost us our future.

Cairo is a harbinger of things to come here.  Get ready.

“The spirit of resistance to government is so valuable on certain occasions, that I wish it to be always kept alive. It will often be exercised when wrong, but better so than not to be exercised at all. I like a little rebellion now and then.”