Befehl ist befehl means orders are orders which is the usual explanation given for barbaric behavior by Nazis on trial after WWII. The malefactors were hanged who attempted this defense yet this quaint notion is the bedrock of all US police behavior and explanation for its excess.

Officer safety is part of the evil trifecta that enables much of the police violence and I have taken all these things to task in past essays, so I won’t bore you with the details. The remaining legs in this are police unions and qualified immunity, which many in the commentariat have handled with alacrity.

It bears repeating, absent police forces, no political bad actor can deny one freedom or erase any liberty from any individual or group. The police exist to serve and protect their political rulers no matter how much they naysay to the contrary. The aforementioned trifecta is the deal with the devil to ensure that the police have a license to kill and guarantee all investigations are conducted by themselves on themselves. Imagine how the economically illiterate bedwetters on the left would scream if corporations were left to investigate their own supposed transgressions. This is why police, robed government employees and their sycophants in the entire legal system are immune to justice, a moral compass and restitution to victims of the wretched system in place in the USSA.

National Socialism died in Germany in 1946 at the Nuremberg trials but the key components of the trials that enraged so many humans planet-wide at the conclusion of the War to Save Josef Stalin was the insistence of both low and high ranking Nazis alike that they bore no responsibility for their actions because they were merely following orders. The original trials started in 1946 but were followed by other trials:

All of these Allied legal trials very specifically targeted the barbaric behavior of the Nazis while excusing any such behavior of the Allies such as the gruesome and murderous strategic bombing campaigns world wide by the Allies. The duplicity and wink and nod to Soviet crimes was especially nauseating but at least the Germans were held to account in spite of the double standard imposed by the West.

The crimes were grouped in three categories in international law: crimes against peace, war crimes and crimes against humanity. The superior orders defense so beloved to the criminals on trial was ruled as inadmissible and this was further complicated by the 1998 Rome Statute of the International Criminal Court, which did give some interesting escape clauses to governments which sought to skirt the meaning and isolate the indefensible superior orders defense to genocide and crimes against humanity. This may be the international get out of jail free card for governments that need to provide legal coverage for the ravages and immoral behavior of their constabulary.

I happen to think the superior orders defense is ludicrous and merely excuses willing barbarians in the conduct of their mayhem. But this very notion of superior orders is the standard defense for the police brutality, malpractice and savagery that is everyday business for the US law enforcement apparatus.

What does this brief history lesson in power politics and the hanging of the deserved have to do with American policing? Officer safety. This notion means that any ”officer” who feels threatened or in danger may kill whoever they perceive to be doing so and get away with it with the fully faith and backing of the Federal government and its puppet regimes in the states. This murder and mayhem has easily ramped up and accelerated to unprecedented levels since the ironic War on Terrorism began after 911. That unfortunate event has Bin Laden and his entire crew of misfits cackling at the incredible success they have foisted on the American people and the West by making the West strangle itself and extinguish its individual liberties by its own hand.

“The fact that a person acted pursuant to order of his Government or of a superior does not relieve him from responsibility under international law, provided a moral choice was in fact possible to him.”

Police behavior in the US in concert with the American legal system has embraced this to protect its agents and praetorians in the conduct of their everyday duties. Again, the impossible moral equation is supposing that immoral ends can midwife moral ends but this is the wickedly evil calculus that animates most government activity in the US.

Those Germans dangling at the end of a rope after WWII died. If they had been dressed in the absurd garb of modern American cops, they would have not only have gotten away with their crimes but would have had the full support and entire legal system to defend their indefensible behavior against all comers. They probably would have been adorned with medals and applauded for their barbarism.

Terrorism is politically motivated violence against non-combatants and innocents and that is the very definition by which all governments maintain and expand their power. There is no mean coincidence that police in America behave like an occupying force enforcing laws that have no place in a free society whether the illegal vegetation laws or ordinances against consensual behavior that ensure America has the highest per capita prison population on Earth. Much like the military industrial complex for which overseas martial adventures are sophisticated money-laundering operations, the same applies to the government-legal complex that gums up the US economy, ensnares innocents in a host of malum prohibitum laws and justifies the mass surveillance activities of a government that seeks total control over its tax cattle.

The entire rotten American judicial system and its badged janissaries derive their disproportionate power from a number of sources but the most important is the absurd notion that the bodies stacked up like cord-wood in the US gulag system or the room temperature corpses littering the roadside as frightened cops use deadly force are excused because some are more equal than others. In this case, the cops who initiate violence for a living are given carte blanche to maim or extinguish anyone who dares to make them feel unsafe. When one looks at the mortality rate of this policing profession, the numbers speak to an extraordinarily safe profession despite the mewling of the presstitutes fellating the state fawning admiration over their protectors. They are excused because the poor overweight and cognitively challenged “thin black and black line” is merely following orders. They are merely enforcing the law. They don’t make the law, they simply administer it good and hard.

These worthies don’t interpret the law nor establish a moral compass to test its virtue, they do what they are told. Whether one agrees with the tremendous moral indignation that animated the Nuremberg trials or not, the forum asked a very keen question: “Can the agents of the state be excused from the conduct of morally indefensible behavior because they were following orders?”

The answer then was a resounding no and remains a resounding negative to anyone who looks at the trail of tears known as American policing across the fetid plain as armed government employees fine, kidnap, cage, maim and kill depending on the level of resistance. Nearly seven million humans in the US are on probation, in cages or on parole. Those unfortunates have families that number in the tens of millions and they are getting mighty tired of watching the news every night or the thousands of videos on the internet that portray a police who maim and kill with abandon. Rarely are they held accountable and the predictable response of the killers investigating themselves and justifying the mayhem is Exhibit A in why the American legal system has no moral authority whatsoever anymore.

In the best of worlds, the total abolition of state police mechanisms period but until humanity can wrap its arms around the problem and wean itself from the collectivist fever dream, this is merely the ideal. Since there are no good cops, this would be the optimal solution. Modern society is simply yielding to the worse people in charge to protect the frightened from a few bad people.

Several things can be done now:

That would be a good start and I am sure plenty of other suggestions can be offered to diminish and eventually eliminate the existential threat to human liberty – the cop.

If any un-badged citizen were to conduct themselves as cops do on a daily basis, there is not enough cell space to house the miscreants. It’s time to hold them to the same standards as the Nuremberg lawyers did in 1945-47. Following orders is no excuse for bad and lethal behavior.

Bad laws were meant to be broken.

“After a shooting spree, they always want to take the guns away from the people who didn’t do it. I sure as hell wouldn’t want to live in a society where the only people allowed guns are the police and the military.” 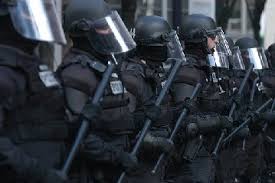 34 thoughts on “Befehl ist Befehl: Why Cops Are Morally Wrong by Bill Buppert”