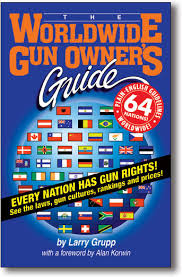 I had the pleasure to pick up Larry’s book and I was surprised at the number of revelations in store.  I consider myself a senior member of the gun community in both the use of firearms and contending with the constant government depredations and threats visited on the gun community yet I had no idea the breadth and depth of gun cultures and ownership off our shores.  I have often thought that if these united States are the freest country in the world for guns, the planet must be a hoplophobe’s paradise.  Not so.  We are considering a move overseas and Larry’s book was most instructive.  He was most kind to answer the ten questions I sent him.  I am certain that if anyone has any further questions I may not have entertained, we will post them to the ZeroGov Forum and discuss them there.  BTW, the US is number nine of the list meaning that eight nations are freer than America with respect to gun rights. -BB

1. What motivated you to write the book?

I was motivated to write my book on gun laws in numerous other countries around the world when I realized that U.S. anti-gunners were either misinformed or untruthful when they claim the U.S. is the only country in the world with free and easy gun ownership rights and the only country with a gun culture.

It seemed important to me to get accurate, usable information into the hands of our own defenders of the right to own and use firearms.

2. I was very surprised at the results in the book because we are propagandized to think that we are the only country on earth that protects private firearms ownership.

Private ownership of firearms is seen by a significant number of people around the world as a deterrent to crime, civil unrest and tyranny, as evidenced by how quickly guns and ammunition are spirited away from battle sites or places where police confrontations have occurred and hidden.  Also some—but not all—nations that have been cruelly overrun by neighboring aggressors subsequently tend to allow relatively free and easy private gun ownership.  Finland, Switzerland and San Marino are examples.  Government officials in Israel, Belgium and Thailand have forgotten their lessons, but still allow some gun ownership.

3. Any updates or addition or deletions since you published the book?

Gun laws on an international basis are a sometimes fast-moving target.  Change seems to be common.  This change, however, has—of late—been relatively modest.  Gun owners and citizens in general seem to have united within their various countries to minimize and deflect any significant tightening of rules and regulations.  This has been demonstrably true in England, Brazil, France and Switzerland.

4. Where are the most optimal places outside of the US that allow the legal ownership of suppressors and/or machine guns?
If ownership of guns is absolutely the only issue, it is probably the Khyber Pass area of Pakistan.  However, there is little rule of law or property rights in those places to attract most westerners.  Finland, Switzerland, New Zealand, Luxembourg, Argentina, Crete, San Marino and Oman have very agreeable gun rights.  But each of these places has its own limitations ranging from poor climate to very expensive costs of living to poor to no religious freedom.

5. If there was one country you could move to as a gun owner, where would that be?

I have seriously considered moving to New Zealand.  They speak a kind of intelligible English, have a nice standard of living, modest cost of living, good property rights and some workable gun rights.  New Zealand is a complete anomaly on a world-wide basis.  Citizens there tend to trust their government—a characteristic we gun-owning Americans cannot comprehend.

6. I think folks will be surprised at the status of Luxembourg and Suisse, can you explain how you think they have managed to retain the rights they do in spite of the hoplophobic EU?

Explaining how these little countries such a Luxembourg and Switzerland, managed to retain their gun rights is a tough, mostly theoretical, philosophical question.

I believe they have their gun rights for four principal but certainly debatable reasons:

(1)  They were once overrun by a neighboring aggressor.
(2)  They have a culture of independence rather than dependence, and are—or were—a Christian nation.
(3)  They are relatively wealthy.
(4)  They are compact and homogeneous societies wherein citizens frequently communicate with each other.

7. Looking around the globe, is there anything we as Americans can learn from other countries to either retain or improve our gun ownership?

Yes, many of the rules and regulations promulgated by the anti’s have their origin in other countries.  For instance, regulations prohibiting private ownership of pistols may have started in the U.K. or Russia.  Ballistic tracking and registration may have its origin in Ecuador; limitations on numbers of guns one may hold in Colombia; limitations on silencers and full auto guns in the U.S.; sporting purposes in Germany, and so on.

8. What are the prospects of rolling back the 1934 NFA and 1968 GCA and other obnoxious restrictions on gun ownership in the US?  Again, any strategies we can learn from other countries?

Canada and New Zealand both to a limited extent rolled back or ignored some parts of their gun laws, but I am not optimistic for the U.S.

Politicians, especially controlling, autocratic ones, fully realize that they are in mortal danger if they start allowing citizens to own common military weapons.

9. Is it easy to legally ship guns out of the US to a destination country if one decides to expatriate?

This mostly depends on the country.  Diligent inquiry in specific countries must be undertaken before any shipments are made.  Also, keep in mind that shipping guns is becoming very, very difficult.  I recently worked with a fellow who wanted to ship three antique (pre-1898) guns out of Sweden and could not find a carrier to take them back to the U.S. for him.

10.        Do you suspect that things in America will get worse in the future for gun owners here?

If I could accurately predict the future, I would soon grow wealthy in our stock market.  Yet, I do believe American gun owners are sufficiently alerted that their vigilance will preclude many major changes in our gun laws.

Most encouraging, it would seem, is the imminent financial collapse of our government.  They may not have sufficient funds to send out agents to harass us.