Publisher’s Note: It’s not a hundred days into the new circus in the Offal Office and the true colors are showing, as Trump gets comfortable with the Deep State and its bloodthirsty tendencies. National socialist healthcare remains firmly in place destroying whatever tattered remnants of free market medical modalities remain in the above ground economy.

The blood-spattered American foreign policy apparatus is now trying to expand its violence to get Western boots on the ground in Syria to complement the rest of the failed martial meddling in the Middle East and champion the Wahabbist ascendency and continuing pogrom against Shia influence. The amphibian is even claiming he has found newfound respect for the efficacy and usefulness f NATO. Will wonders never cease?

This will be the Bushevik’s fifth term in continuing to consolidate Deep State gains in the golden age of the internet. For the first time in history, the surveillance organs of the state may just be able to make every human transaction transparent to them and have an ex post facto capability of building a case against anyone they wish to harass or reduce to penury in the “just-us system”.

Just another step toward the future where the government has sufficient power and influence to simply murder with impunity whoever it considers a threat to national security. The notion of national security has never had anything to do with protecting the population so much as providing cover for unlimited expansion of the power of the government.

Trump is just another political apparatchik who will do what it takes to keep the leviathan alive.

Someday Americans will look through the barbed wired fence surrounding their pathetic lives and realize that the alleged protections offered by the state were simply a clever misdirection to surrender every scrap of moral agency and self-volition they had. There is no Left or Right, only parasitic plunderers and producers.

Most people are comfortable gazing on the delicious piece of steak on the fork in front of them and condemning their children to the future they are too cowardly to fight.

William N. Grigg died today and he will be sorely missed. His unique eloquence, intense investigation skills, documentarian tendencies and terrific writing were without peer. Will, thanks for everything you’ve done to make the world a more moral place and put the policeman where he belongs.

There is a way out of this but since this isn’t a free country and this is not an underground samizdat, the words can’t be spoken but the reflective man can grok what it is. -BB 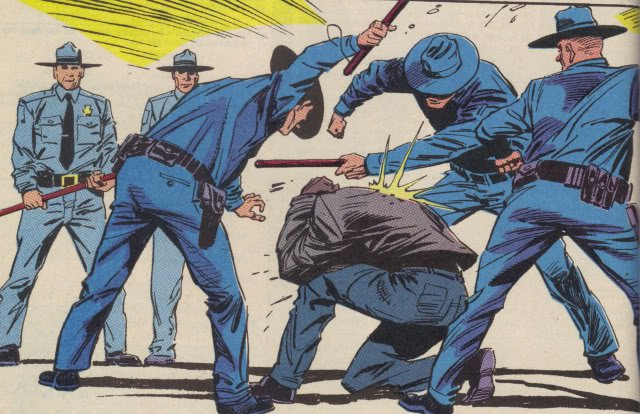 The United Airlines incident where the unfortunate paying passenger was dragged from the airplane and later repatriated to the plane after being bloodied and mauled by a local government thug. New information on the passenger that was mauled has emerged that paints him in a bad light but remains moot to the incident at hand. While passengers murmured and feebly took photos with their electronic leashes, not one human being stood up to stop the dragging of the passenger off the plane.

There are plenty of other pundits who can fill in the gory details of what happened and what the implications are.

This is a small pastiche of a larger phenomenon. Everyday, government agents in costume and plainclothes cajole, fine, kidnap, cage, maim and kill Americans across the country. They are merely the evil mediums that translate government into action. The muscle and sinew that makes totalitarianism work like a well-lubricated machine motoring on the lifeblood of the supplicant citizens trapped in the system.

Totalitarianism? In Lee Greenwood’s America? But how…

Is there any human activity not monitored, calibrated, regulated and taxed in America that has any connection to production? As I mentioned earlier, the government is colored rags and bad music disguising a mailed fist that has one sole task: to take. That is what government does. It robs from the productive and the innovative to give to the undeserving and well-armed thugs in the employ of the state.

But there’s sophistication to the kabuki theater of the state, the military industrial complex provisions a unique symbiosis with the forever war America has conducted against far-flung battlegrounds around the world.

That maligned and imperfect passenger is a simulacrum of America today. A medical practitioner who leveraged the prescription system for fun and profit. Yet another state created problem. He’s no hero or model citizen by any stretch but that is not germane to his savaging on the aircraft after he was seated as a paying passenger.

Not one of the passengers on that plane knew of his past transgressions, they were assuming a fellow American was being wronged but they had been programmed to yield to any excess so long as the malefactor had a badge and a government costume on.

Decius said this was the Flight 93 election for a variety of reasons, some fatuous. Like the notion that a new occupant in the Offal Office could possible make the nation right again. Wishing over and over again that if we got just the right man to wear the ring of power, all would be well.

Absent the conspiracy theories surrounding 911 and Flight 93, the seizure of the aircraft proved one thing. All hijackings should be assumed to be one-way trips so that anything that happens on the aircraft should be dealt with immediately. Once the first crew or passenger is maimed or killed, game on. The combat begins.

But Americans have been experiencing a 911 moment with US policing for decades and do nothing about it. The current American Stasi, the FBI, released a revealing study that of 55 million arrests between 2011 and 2016, 2.5 million were for violent offenses. So 96 percent of all these thug-scrum kidnappings are for non-violent offenses. Most likely, malum prohibitum laws whose only victim is the state.

I wonder at the constant barrage of humans mauled and killed on videos on the ‘net. People just stand around and take pictures. Of course, the cops loathe the ability of Helots to record their activities but they also know that the chances are better of being struck by lightning and attacked by a Great White shark at the same time of being held accountable to the atrocities they commit everyday.

So the punditocracy skirts at the edges of the problem by saying that a new pilot in the cockpit in DC will solve all the nation’s ills when the actual sickness is much deeper: America is too big to succeed at anything but tyranny. And that tyranny is only operable through its badged janissaries doing the heavy lifting for the regulatory monster, the Deep State. Why is anyone surprised at the chicanery and legerdemain practiced by the “intelligence community” in the US. They serve one single purpose and it has nothing to do with protecting ordinary citizens, the whole wretched construct is designed to be a self-licking ice cream cone that protects the political mandarins and their associated nomenklatura.

Most Americans still cling to a Disneyesque interpretation of Mr. Smith the congressman representing their best interests. Politician is a child-like word that hides the real meaning; they are merely state violence brokers. Earnest elected and un-elected bureaucrats, whose sole purpose is to celibate, attenuate and expand the violence of the state.

What man in his right mind would comply with the lion’s share of rules, regulations and impediments that the state erects in the path of every step of production unless under the threat of duress and the wood shampoo? You live in a country that has a tax rate exceeding 100%, that monitors and collects every electronic transaction in the mud to space environs of human communications and employ over a million badged thugs who are simply the muscle for political will that has nothing to do with what is right and what is moral. American policing has one singular siren call that excuses everything they do, the very same defense employed by many who were hanged by the neck until dead at Nuremberg.

That imperfect and tiny Vietnamese man dragged off the plane as no one did anything to stop it is you and yours. He just managed to get mauled now instead of later.

That thug who dragged him off did as he was told and de-escalation or negotiation wasn’t in the cards. This may be new to some but this is no Rubicon, this violence has been visited on the country for decades.

Pay attention. You may be next.

13 thoughts on “Thug Nation: Comfortably Numb in the Police State by Bill Buppert”