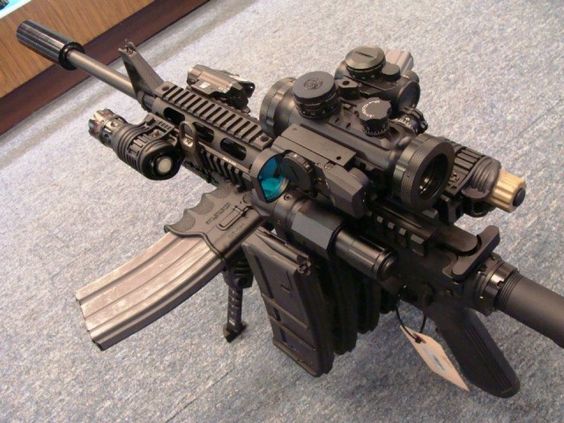 Publisher’s Note: Here is Part I and Part II of John’s series. Many thanks for his practical tactical advice for realistic training and accouterments in the coming Endarkenment.

He and I have both considered the implications of the prepper/threeper obsession with showing up to the end of the world with thousands of dollars of kit and little practice to match the dance card we draw. There will be no mass armies fighting one another. This will be a fight that draws on Michael Collins, Paul Lettow-Vorbeck and TE Lawrence. Your cultural IQ for your AO will be just as valuable as the fire stick in your hand. And most likely it won’t be a rifle.

In the fight ahead the pistol, the camera, the radio and the burner phone will be the weapons of war. The single man will have to channel the wasp in Eric Frank Russell’s classic tome.

Grunt math in the guerrilla fight will always prevail when the insurgent leverages the apparent strength of the better equipped foe against them. America has been defeated in the Middle East no matter how you service the pig.

Take a look at the insurgency life cycle in this document on page 22.

Look at the bright side, the more oppressive the American government becomes, the more exotic the insurgent orchids growing in the continental greenhouse. Rebellion and resistance has its own distinct ecology it flourishes in.

Per PT, you don’t need a gym membership and the fatter you are the better your bodyweight isometric potential is. Want to get an effective exercise regime with no free weights in eleven minutes? Try this.

There is no cavalry coming, you’re on your own. Make the best of a bad situation.

I hope Part III brings this series to a close, but I fear it could go on forever. We are currently seeing the Alt Right and Patriot factions of the Right going into seizures about the Leftist, Antifa and Black Lives Matter factions engaging in Direct Action, something the III have threatened for years. As Mosby has pointed out, the will to engage in violence is often more dangerous than playing Rambo or buying another $500 AR-15. (That probably doesn’t work just like their other 6) Mosby says it much better than me:

“These “hapless morons” are off their fucking couches, engaging in the physical violence that the Right yammered about for the last eight years, without doing fuck all. I’m not condoning it… willingness to engage in violent direct-action is going to get a whole fuckton of “prepared militias” killed dead…”

Like Bill Buppert, I cannot disagree with any dismantling of the Fedgov by Trump, but I hold no illusions that it will actually shrink. These are the times to continue working on the skills, techniques and procedures to complete your mission in life.

There is a common argument in the firearms world that we lose fine motor skills during the fight. I do not doubt there is truth to this. But there seems to be a level of Derp contained in some of these arguments.

The argument goes that we must power stroke the slide, i.e., use our hands to come over the top and physically run the slide on a handgun or run the charging handle on an AR-15 in order to perform a reload. Both of these weapons have slide/bolt releases and can be released without running the action of the weapon. The argument says that we have to do this, because we cannot physically hit such small buttons under stress. We must use fine motor skills to reload the gun, so it’s better to run the slide on a handgun than hit the slide stop.

Hitting the bolt release on an AR15 or the slide stop on a pistol is demonstrably faster vs. running the action and only stands to reason that if you can perform dozens of fine motor reps under stress, you can perform one more to reload the gun. The fine motor skills argument is basically a training and practice issue. Practice makes permanent. Do it right.

And to be perfectly clear, this is not an argument in favor of either side of this argument, I literally do not care one lick which method you prefer, but please don’t use the “fine motor fallacy.” Slide stop vs. power stroke is just a life style choice. I personally strong hand thumb release the slide on a pistol on emergency reloads by driving the slide stop into my seated thumb, when seating the magazine (unless I don’t get a slide lock due to high grip) and hit the bolt release on AR15’s with support hand thumb.

Any time there is a mass shooting, active shooter situation or anything similar, the sheep dog chorus starts talking about their truck guns. The fact of the matter is during an event generally you have what you have on your person.

There are many aspects of this truck gun debate. Yes, there could possibly be a time when you could leave a mass shooting, sprint your 300 lb. body 150 yards to the back of the parking lot of the movie theater, fighting the hundreds of hysterical people trying to escape, unchain your AK74 shorty after fumbling with your key for the lock from under your back seat which is filled with 4 bug out bags, a kids car seat and 14 McDonalds bags of trash, put on your plate carrier and chest rig, then sprint 150 yards back in, fighting the flow of the crowd, manage to not alarm them being kitted up like a SWAT member with your rifle at high port, smoke check the shooter, and manage not to be shot by responding Law Enforcement. But just exactly how likely is that?

Frankly put it’s a Tac-Tard fantasy. There are many reasons to carry a truck gun, but this fantasy scenario is not one of them. People making these arguments simply have not thought these things through. For instance, if you are with your family, shouldn’t your mission in this situation be protecting them? If you manage to get them out of the building where there is an active shooter, you should be in your car speeding away from the scene with your family, NOT leaving them alone in a parking lot while you go play sheep dog. If you get shot by the active shooter or by responding law enforcement while returning to the situation, how is this helping your family?

Broadly speaking, I’ll practice avoidance, deterrence and de-escalation every time, before I am forced to fight. I certainly won’t look for fights that I may not know the totality of the circumstances, nor charge into fights where exit is an option when the odds aren’t in my favor. I don’t necessarily want to willingly go into a fight when other options exist, such as the ‘return to the scene with a truck gun’ crowd, where I am forced to operate in unfamiliar terrain and most likely by myself.

Carrying a truck gun makes sense for lots of people. For instance, if you carry a truck gun, and you come home to your front door knocked off its hinges, where your daughter should be after school, I’d rather deal with that situation with a rifle than a pistol. Perhaps you live in a rural environment and have to deal with predators and need to be capable of making those long shots. But please guys, don’t delude yourself into thinking this truck gun set up solves all problems, especially ‘active shooter’ situations.

One of the areas focused on the least by the preparedness minded person is the physical conditioning needed to perform certain mission critical tasks. This is either from simple glossing over physical training in their mission planning process or because they suffer from the Dunning Kruger effect. This effect is defined as “a cognitive bias in which low-ability individuals suffer from illusory superiority, mistakenly assessing their ability as much higher than it really is.”

If you have ever talked to an overweight prepper at a gun show or preparedness event, you are bound to have heard it. How they live in an area where the mountains can range from 2000-6600 ft. elevation, and they are going to strap on their Bug Out Bag that weights 90lbs and get out of dodge when the balloon goes up, when they weigh 330lbs and gas out when they walk up their nine step stair case in their house.

The fact is if you are not physically capable of performing whatever mission it is you have in mind, you are fooling yourself. What is the point in studying military manuals and the Ranger Handbook to learn how to gracefully conduct long range recon patrols involving heavy ruck sacks and carrying weapons, body armor and hundreds of rounds of ammo, when you cannot do a body weight squat or walk 20 steps without having keeling over because you smoke three packs of cigarettes a day? Instead of spending all your time learning Intelligence Operations to obtain the Intel necessary to perform your 23 mile march to raid Bubba Gump’s Lair during TEOTWAWKI, which you’ll gas out after .04 mile, maybe you should get at a level of physical conditioning to not suck at life.

Instead of buying your 6th budget build rifle, it may be wise to invest in a gym membership or some weight training equipment, as well as getting your conditioning in check.

Which brings us to standards. You should have some. Just as muzzle aversion techniques are not necessarily ready positions, standards are not training programs. These are simply metrics to measure progress and your ability. You wouldn’t start a diet program without first weighing yourself. You shouldn’t start a physical training (PT) program without some metric to track your progress and determine your abilities.

Another issue is practice. Why don’t people practice? They’ll spend thousands on weapons and ammo, spend hundreds or thousands on classes to learn new skills, but some never continue building on the skills they learned at class. I’ve heard this process compared to taking out a loan. You are trying to achieve proficiency at a given task. The training class is the down payment. You have to continue to make the payments through practice on your own time in order to own the skills. If you don’t, you lose them.

People, you need to make the payments. You need to practice. You need to be proficient at these skills to be competent at the techniques and procedures needed to complete your mission. Whether that mission is concealed carry and home defense or eight man building clearing and MOUT (Militarized Operations Urban Terrain) patrolling.

Small daily “payments” on this loan, i.e., practice, compound into large benefits over time. Instead of sitting around talking about the training with your buddies that will never happen, run dry fire drills. Instead of talking about doing a big PT session next Saturday, put your pack and walk 3 miles today. Committing to this martial path requires effort, everyday, no days off.

These are things we can all do. The only thing stopping you from achieving your goals is yourself. Don’t be a talker. Do work.

Head up, Gun up.About the author: John Meyers traces his Appalachian ancestry back nine generations to the 1750’s. He lives with his family on the high ridges of the Smoky Mountains.

17 thoughts on “Defeating Doomsday Derp: Redemption in the 3rd Act by John Meyers”