“The sad truth is that most evil is done by people who never make up their minds to be either good or evil.”
– Hannah Arendt

America has been a dangerous place for innocent citizens for a long time.  Whether one was an indentured or chattel slave in the 18th and 19th century or a hapless member of the pensioners who got beat down in the Bonus Marchers Protest in 1932 or one of thousands of Americans kidnapped, caged, maimed and killed by the police annually in the Land of the Free, you live in a country that has not only practiced this behavior but even legally endorsed it in 2001 after the 9/11 attacks in New York and Mordor on the Potomac.

Bush did have the hubris to deliver a speech condemning torture on 26 June 2003 with full knowledge of what his regime was doing:

“Freedom from torture is an inalienable human right. The Convention Against Torture and Other Cruel, Inhuman or Degrading Treatment, ratified by the United States and more than 130 other countries since 1984, forbids governments from deliberately inflicting severe physical or mental pain or suffering on those within their custody or control. Yet torture continues to be practiced around the world by rogue regimes whose cruel methods match their determination to crush the human spirit. Beating, burning, rape, and electric shock are some of the grisly tools such regimes use to terrorize their own citizens. These despicable crimes cannot be tolerated by a world committed to justice.”

When one examines the first through fourth Geneva conventions and associated protocols, you make a grisly discovery.  Your treatment at the hands of the US government and its associated police agencies down to the local level is better afforded to you as a Prisoner of War than an ordinary civilian in America.  Mind you, even that has become more Orwellian with the abandonment by the Bush administration of even these and a complete reversal of the UN Convention Against Torture ironically passed in 1984.  POWs, in the countries that respect the Geneva and Hague conventions, have more rights than ordinary citizens in the American penal system.

Some of the torture memorandums under Bush have been released and the evidence is clear that not only did the Administration use arcane and amateurish legal arguments to abandon centuries of moral and philosophical proscriptions against torture but it became official policy.  David Addington and John Yoo were the primary architects of the various sundering of civil liberties and twisted legal reasoning that advocated and created the torture complex that Obama has refused to renounce or dispose of.   These worthies were the philosopher kings who devised the means for Bush to not only fight terror with terror but also a justification for barbarism.

In the December [2005] debate with Cassel, Yoo was asked: “If the president deems that he’s got to torture somebody, including by crushing the testicles of the person’s child, there is no law that can stop him?”

Cassel: “Also no law by Congress? That is what you wrote in the August 2002 memo [that went to the president].”

Yoo: “I think it depends on why the president thinks he needs to do that.”

Article 1 of the Convention Against Torture endorsed in 1984:

Any act by which severe pain or suffering, whether physical or mental, is intentionally inflicted on a person for such purposes as obtaining from him or a third person, information or a confession, punishing him for an act he or a third person has committed or is suspected of having committed, or intimidating or coercing him or a third person, or for any reason based on discrimination of any kind, when such pain or suffering is inflicted by or at the instigation of or with the consent or acquiescence of a public official or other person acting in an official capacity. It does not include pain or suffering arising only from, inherent in or incidental to lawful sanctions.

Jane Mayer was asked about the efficacy of torture.  Her book is required reading to see how Mordor codified torture during the Bushevik regime.  As a collectivist journalist, she shares the inner blind spot with the rest of her colleagues at the New York media complex of holding her nose about torture (rightfully so) but being completely blind to her advocacy of big government which relies on violence as its modus operandi.

Q. Leaving aside the essential moral and legal questions, is there any indication that this harsh treatment “worked,” that it yielded valuable intelligence?

A. One thing that came through all of this research was that this new paradigm—again, basically redesigning our laws in order to be able to coerce or maybe even torture detainees when we interrogate them—has been completely counterproductive. It’s been sold as if it’s some sort of tough new effective thing we’ve got to do. In fact, if you really go carefully over these cases, you find that it’s almost always produced false confessions.

There are so many cases where specific detainees wound up making up stuff in order to make the pain stop, and I’ve got in this book, I think for the first time, some of the contents of the Red Cross report where they interviewed the CIA’s detainees in Guantanamo, who are there now, and Khalid Sheik Mohamed told them, almost sneeringly, that he created false alerts in America. He takes credit for having sent—put the American government on high alert on false premises. So, it’s just created an ocean on false confessions. There’s some real stuff in there, but it’s very hard for the intelligence agencies to figure out what’s real and what’s not. One former CIA official told me 90 percent of what they got was crap.

The way we have handled detainees and the absurd illegal combatant framework in the infamous and state-worshiping War on Terror has been disgraceful, ungentlemanly and philosophically vile.  But then again, what other behavior would I expect from governments?

Here are ten torture techniques endorsed by the Bush administration.

Here is George Bush on the evolution of torture in his regime:

— “The United States is committed to the worldwide elimination of torture and we are leading this fight by example.” President Bush on UN Torture Victims Recognition Day 26 June 2003

— “Freedom from torture is an inalienable human right and we are committed to building a world where human rights are respected and protected by the rule of law … Many have been detained, arrested, thrown in prison and subjected to torture by regimes that fail to understand that their habits of control will not serve them well in the long term.” Statement by President Bush released by the White House on June 26, 2005

— “We do not torture.” President Bush to reporters during a visit to Panama in November 2005

— “The bill Congress sent me would take away one of the most valuable tools in the war on terror — the CIA program to detain and question key terrorist leaders and operatives.” President Bush on his veto of a bill that would have outlawed waterboarding in March 2008

— “I’m aware our national security team met on this issue. And I approved … I told the country we did that. And I also told them it was legal. We had legal opinions that enabled us to do it.” President Bush in an interview with ABC about interrogation tactics used on detainees in April 2008

Incidentally, while we have witnessed the sickening legal rationale for torturing the detainees captured in the War on Terror, a cursory glance at the mounting tsunami of domestic police abuses and misconduct in America dovetails nicely with the torture codification emanating from the White House for these barbaric and vicious practices.

What makes all the aforementioned treaties and legal prognostications  so wicked is the ease by which an executive authority in the last superpower on Earth can continue to practice an initiation and continuing maintenance of violence unconscionable to virtuous humans.

The State codifies cruelty, violence and torture as a matter of state prerogative.  This is simply what states do.  You would be hard pressed to find any nation on Earth that, when examined closely, does not practice and endorse abuses by its paid agents on the citizens caught in its jurisdiction.  It is unlimited and has been demonstrated here that an American president can justify ANY violence or cruelty visited on other humans.

Truman dropped the atomic bomb on Japan as a warning for the Russians in 1945 because the Japanese signed a treaty in August 1945 they had been pursuing since January of that year (some speculate as early as 1943) eerily similar to the peace proposal floated during the entire year.  The bomb was not meant for a Japanese audience but to get the attention of the Russians at the dawn of the Cold War.  The hapless victims in Hiroshima and Nagasaki were merely a demonstration project to get the attention of the other USSR (the one in Russia not North America).

Look at it from another perspective, if a government is willing to go through all the legal hoops (and bureaucratic stonewalling where it cannot) to justify visiting cruelty, maiming and killing on a class of people it chooses to dispose of in this way, what stops that from expanding to the general citizenry? If the physical and psychological destruction of other humans is not only authorized but encouraged, where does that leave the moral position of government?  How does this affect the torturers themselves?  One can even say that torture policies were in part responsible for the near military coup in France in 1962.

I happen to think that the tolerance and encouragement of torture and cruelty of government agents is a natural outgrowth of all states, we are simply witnesses to the inevitable unveiling of the US abuses over time and their acceleration after 2001.  I hope it it further diminishes and tarnishes even further the expectations anyone has of justice from the State.

For the longest time, the government-media complex has done an extraordinary job of convincing Americans that we are exceptional, the City on the Hill and all the other balderdash going back to the political coup by the Founding Lawyers in 1787-88.  We are not nor never have been.  When government is stripped of its bunting and patriotic gore, it is a tax jurisdiction run by violence-prone psychopaths whose only means to maintenance and expansion of power is violence and the threat thereof.  That violence is codified in the criminal code.  It is exercised around the globe through military means.  And, worst of all, it is justified in our names.

The blood is on everybody.

“You can chain me, you can torture me, you can even destroy this body, but you will never imprison my mind.”
– Mohandas Gandhi 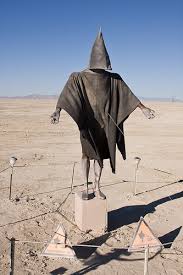 3 thoughts on “The Torture State by Bill Buppert”