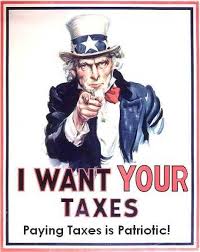 “When there’s a single thief, it’s robbery.  When there are a thousand thieves, it’s taxation.”

I know, it’s a bold claim. I could make the same old worn out claim that taxation is theft, which it is, but I believe I could take it a little further. I believe the failure to pay taxes will lead to your death, and paying your taxes will also lead to your death. Either the death of your freedom or your physical death.

I hate paying my property taxes. I believe it is completely immoral to perpetually tax me on my property. I remember the first time I paid property taxes. I was 18, and still living at home. My father handed me a bill for the property tax on my car. I remember saying, “what’s this?” He said “it’s the tax bill for your car”, I said “what?!? I already paid the taxes on my car!” He said “well, it is what it is”. So after that little dialogue, he gave me a rundown on how the perpetual scam known as property tax works. I knew in my heart that this was wrong, but I paid it anyway. To this day, I refuse to pay my property taxes. The tax jurisdiction (county) I live in will tack on penalties and interest to the taxes they claim I owe. So they tax me on the annual tax bill they send me. I eventually drive down to the county office, and offer to pay the tax, but I always refuse to pay the penalties and interest. Sometimes it works, sometimes it doesn’t. However, I only stroke the check for the amount of the tax they claim I owe. Let them continue to charge me a tax on a tax, so be it. That they can garnish my paycheck for, I refuse to pay it, at least face to face.

Back in 2005 I tried to refuse to pay the IRS, and that went over like a lead balloon. My paychecks were eventually garnished. To make a long story very short, I claimed more dependents than I actually had, and they audited me. They claimed I committed “fraud” and I was lucky I wasn’t going to jail. They took every paycheck from me for five weeks, I forgot exactly how much they stole from me, but I recall it was around 90% of my paycheck. I’m sure I could have called and begged them to be merciful, but that’s just not my style. I am thankful I work with my hands, someone’s car is always broken, and that is money they will never get from me. So apparently it’s “fraud” if you try to keep property that is rightfully yours. It’s hard to try and take a principled stand on taxes, and have a young family at home. I applaud those that do. For now, I’ll continue to tuck my tail, and pay up, therefore funding my own death.  I will do what I can without getting thrown in a cage. We do most of our shopping at places where no sales tax is charged, or at places where I can talk them out of charging me tax. Seeing as how everything is taxed, it’s tough to avoid.

I would like to examine both of these situations and see what would have happened to me if I absolutely refused to pay. I’m sure my mailbox would have been flooded with tax bills they claim I owed with astronomical “penalties” tacked on. After that, maybe some threatening letters. In the end, taxes are always backed up by the gun. It will always come down to heavily armed men paying me a visit. If I chose to resist the theft of my property, I will be killed. If I do not resist my arrest, and get thrown in a cage, my freedom that was already on life support would be dealt the final death blow. Either way, death will come from resistance or non-resistance, the death of me, or my freedom.

Even if taxes are paid in full on time, every time, I still run the risk of State caused death. In this country, there are almost five armed police raids every hour! I would be very naive to think these armed tax-eaters are after the very worst among us. I highly doubt the majority of these raids are targeting murderers, and rapists. I’m willing to bet most of them are militarized fishing expeditions. The taxes we pay go to fund all of it. Do you think it can only happen to drug dealers? I’ll bet most of you reading this are breaking some kind of law, code, or statute, and you don’t even know it. Your tax money is being used to fund the very thing that will eventually turn all of you into criminals. Don’t believe me? Study history.  When this happens, pay up or get thrown in a cage, criminal. Resist and die.

In it, I talked about how the county I live in made a criminal out of me for not covering my truck with a vehicle cover, outrageous. Now the same bureaucrat (whose paycheck I help fund!) that accused me of the heinous crime of not covering my truck now has now taken to the skies. The county (which is totally broke) bought an airplane (with tax money) to try and rob the good rural folk around here of more money. My buddy has a 170 acre farm, and he has quite a few old vehicles out back by the barn. He was informed by the county that he was only “allowed” to have two unregistered vehicles “visible” on the property, if he did not remedy this situation he would have to pay. We pushed the vehicles in the barn and told them to go to hell. The tax jurisdiction I reside in is now airborne, and spying on the cattle. My buddy does not think the way I do (although I’m trying!) and he pays his taxes. His resistance to the violation of the ordinance would have eventually led to his death, or the death of his freedom. It won’t be long now until we are all criminals, and this will mean fines, jail, and even death.

“To force a man to pay for the violation of his own liberty is indeed an addition of insult to injury.”

1 thought on “Taxation is Death By Chris Dates”