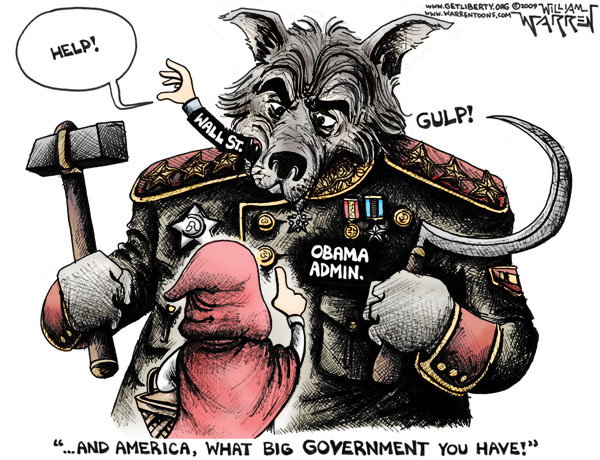 “Politics is the art of looking for trouble, finding it everywhere, diagnosing it incorrectly and applying the wrong remedies.”
– Groucho Marx

I have written before about the impossibility of limited government.  Let us make sure our terms are correct.  Government is any entity that attempts to monopolize the use of force and reserves first use of same to itself.  They make noises about consent but this is simply window-dressing to keep the animals in the feedlot from feeling oppressed or taken advantage of.  Their variants range from communism to socialism to democracy.  The first two, at least, are honest in their intentions of ballooning government oppression to proportions common in history but democracy is probably the biggest and most dangerous sham when it comes to governance.  While the usual bugbears of collectivism make themselves manifestly evident in terror-states like the USSR and Communist China, the Western democracies make Orwell proud.  The pastiche of 1984 and Brave New World come to the fore in Europe and America.  Here in the land of the unfree and home of the formerly brave, the huge Federal leviathan is helmed by telegenic Presidents whose claim to fame is the ability to speak (George Bush?) in platitudes and illiterate homilies to the joys of government intervention and using the state as the means to empty your neighbors pockets and, magically, the pockets of the unborn through non-consensual deficit spending. Boasting the highest corporate income tax and capital gains rate in the galaxy, America continues to run up mountains of debt and oceans of red ink in pursuit of …bigger government.  In addition, we are afforded the opportunity to spend countless billions and trillions maiming and murdering tens of thousands of men, women and children overseas in the name of liberation and advancement to the joys of democracy (God help them…).

Take a breath because I am about to insult most of my readership and increase the volume of my hate-mail.

If you believe in limited government, you are no different than the Communist Party apparatchiks or the socialists or even the Democrat Party or Grand Old Politburo (GOP) members.  You all share a common bond with every democidal maniac traipsing through the sordid and bloody history of government on Earth.  Whether an active member or simply the usual electronically tethered shambler that makes up most of America, your belief in limited government is a fraudulent assessment of what is going on around you.  Limited government never has and will never exist. Whatever the hopes and dreams of the political schemers at the heart of the creation of the new government, usually in the ashes of the last epic government failure, the government will metastasize into a monstrous and bloody-minded giant intent on crushing freedom at every turn and annihilating self-ownership of individuals whenever those unfortunates make their intentions known.

All the Founding Lawyers, even the sainted Thomas Jefferson, were guilty of this tragic delusion that armed strangers must be invested with the power to fine, cage, maim and kill residents of tax jurisdictions (also known quaintly as nation-states) to maintain a just and prosperous society.

So I just arrived from another dimension and know nothing about the formation of societies and Western culture on Earth and the man in the street explains to me why America looks the way it does:

Inter-Dimensional Being (IDB):  What is the purpose of government in this country?

American:  To make us free and prosperous.

IDB:  How is this accomplished?

American:  Well, the government sets up rules for us to live by.  It seeks to make it fair and equitable for every citizen to attain the American Dream.

American:  To get rich and be free and prosperous.

IDB:  Do you sign a contract?  Can you disagree with the policies of this government?

American:  What contract?  Sure, we can disagree but we may very well end up in big trouble like fines or jail if we don’t agree with the majority or whatever our elective representatives have done.  The only contracts I am familiar with are the ones I have with the cell company or mortgage on my house.

IDB:  So if you have a moral disagreement with your government, they will still harass you or worse if you refuse to comply, yet you have signed no contract?  On what grounds can they hold you responsible in that way when they do not even have your personal signature?

American:  That is just crazy talk, I have to do what the government says or I can get in big trouble.

IDB:  Is the government so good with money and resources that you trust it to be financially frugal and make competent decisions?

American:  Look, if you have any experience with TSA or the DMV, you know the government can’t find its ass in the dark with five Klieg lights.  Hell, you should see the total amount I pay in income, sales and property taxes much less the millions of rules and regulations that strangle my small business on a daily basis.

IDB:  The government appears to be no better than organized crime or highwaymen.  Who would put up with that?

American:  I have to go to work now…

Limited government is a chimera and has never existed anywhere.  It is impossible.  One may be a happy minarchist libertarian carping on endlessly about returning to the Constitution, placing government within reasonable limits and holding the elected officials responsible through voting but you may as well be a Communist Party USA organizer or teachers union official; you all speak the same language.  You are providing the government with all the power it needs by simply acknowledging its rightful existence.  Once you fail to question its expansionist nature and participate in endless debates on how to curb the beast, you have lost already.

The question is not how to limit government but simply to take the path to dissolve it, salt the earth where it stood and swear on the blood of your children that you will never let that tragedy happen again.

“The whole aim of practical politics is to keep the populace in a continual state of alarm (and hence clamorous to be led to safety) by menacing them with an endless series of hobgoblins, all of them imaginary.”
– H.L. Mencken

6 thoughts on “Even Libertarians Love Big Government by Bill Buppert”